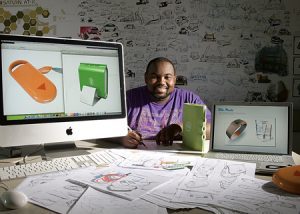 Spencer Nugent won the most prestigious award given to industrial design students.

When Victor and Verna Nugent—the first members of The Church of Jesus Christ of Latter-day Saints to be baptized in Jamaica—first saw BYU’s campus during a visit to Utah in 1975, they knew that they wanted all their children to attend school there someday. More than 30 years later, that dream is realized with the graduation of their youngest son, Spencer L. Nugent (BFA ’07), the fifth Nugent to attend BYU.

And Nugent, an industrial design major, didn’t merely graduate; he graduated with flying colors—and lines and sketches and everything else scribbled inside his design notebooks. He’s one of only two undergraduates in the country to receive a major award from the Industrial Designers Society of America (IDSA) and has already landed a position at ASTRO Studios in San Francisco.

“Spencer has developed quite a network of connections both in the university and in the field of industrial design,” says Richard E. Fry (BFA ’89), the professor who encouraged Nugent to submit his portfolio to the IDSA contest. That portfolio included designs for General Motors, where Nugent spent last summer as an intern, and Intel. For General Motors, Nugent designed a concept Corvette geared toward iPod-toting Generation Y drivers. For Intel, he helped design a product called Intel Juice that combines the resources of multiple old computers to create a new computer.

“Design should inspire others to be better or improve their lives in some way,” Nugent says. “Innovation is the spark that ignites visions of the future.” He adds, “Dream big; don’t limit yourself”—a motto that suits both his own and his family’s story.

Founded by BYU alumnus Fred Adams, this festival is one of North America's premier Shakespeare festivals.