By Ryan Christensen in the Fall 2000 Issue 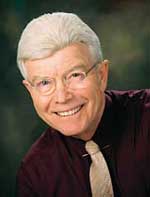 When a young theatre director took a job in Cedar City, Utah, in 1959, he opened his first season with two new Broadway plays.“We did a brand new comedy and a brand new musical that hadn’t even been released in New York,” he says. “And then because we didn’t have any more royalty money, we did a Shakespeare play, The Taming of the Shrew.”But BYU alumnus Fred C. Adams, ’55, MA ’61, didn’t get the response he expected.“A few came to the comedy and a few came to the musical. They were not terribly impressed with my work. But we had to run the Shakespeare play another weekend. Everyone in Cedar City came out to see Shakespeare’s Taming of the Shrew.”As he learned more about the community, Adams says, “I discovered that when Brigham Young sent that first group of settlers into this valley to open the Iron Mission, within a few days of their arrival, while they were still living in their wagons, these people put on the entire Merchant of Venice.There has been a tradition of Shakespeare in this little community from the beginning.”Building on that tradition, in 1961 Adams founded the Utah Shakespearean Festival. Housed on the campus of what is now Southern Utah University in Cedar City, the festival has grown into one of the most respected Shakespeare festivals in North America. And this year the festival gained an additional measure of respect. Every year a Tony Award is given to America’s outstanding regional theatre, and the 2000 Tony Award for Outstanding Regional Theatre went to the Utah Shakespearean Festival. On June 4, in a nationally televised event, Adams and several executives from the festival received the award at Radio City Music Hall.“Liken it, if you would, to winning the Super Bowl,” Adams explains. “The Tony is the most prestigious honor given in theatre. To achieve it is a phenomenal honor, especially if one considers that traditionally this award has gone to New York, to Chicago, to Los Angeles, to San Francisco. And now all of a sudden it comes to Cedar City.”The idea for the festival was sparked in a graduate class at BYU, when Adams was given an assignment to design a theatre company. He designed a small-town Shakespearean festival.“I set it in Logan, Utah,” he says with a laugh, “because I grew up by Bear Lake.”After completing his coursework, Adams took a teaching position at the College of Southern Utah (now Southern Utah University), and though Cedar City was hardly a theatre mecca in those days, he decided to stay.“I met my wife here. We decided we loved Cedar and we wanted to raise our children here. It’s a beautiful place for that. But I didn’t want to give up theatre.”So Adams took the plans he had made at BYU, embellished his design, and founded the Utah Shakespearean Festival.“It started very small, very slow. I’m a child of the Great Depression and grew up with the idea that you don’t go into debt. The festival has grown slowly because we never took out a loan. I can’t go bankrupt; I don’t go broke; the theatre will never close. But it’s meant our growth has been very slow. What we raised last year is what we’re living on this year.” 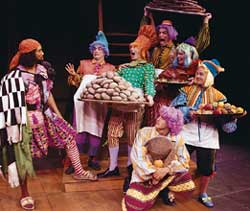 A scene from the Utah Shakespearean Festival’s 1998 production of The Taming of the Shrew. Founded by BYU alumnus Fred Adams, the festival is one of North America’s premier Shakespeare festivals.

In its first season the festival ran for two weeks, attracted 3,276 spectators, and earned about $2,000. In 1999 the festival ran for 10 weeks and sold more than 150,000 tickets. According to the festival’s Web site (https://www.bard.org), the festival and its patrons brought into Cedar City an estimated $32 million in 1998.“Today we have a $5 million budget,” Adams says. “But it has taken a long time.”Adams doesn’t seem to mind the time it has taken. As he says, theatre is his life. “My father and mother met in a theatre company. I directed my first play in the third grade. I’ve always directed. That’s been my life.”Over the years Adams has gradually added new elements to the festival. A replica of Shakespeare’s open-air Globe Theater was dedicated in 1977; a second, indoor theatre was completed in 1989; and a program for supporting contemporary playwrights was introduced in 1992. Additional buildings, including a Renaissance study center and two more theatres, were announced in 1995 and will complete the Utah Shakespearean Festival Centre for the Performing Arts.The festival usually stages three Shakespearean and three non-Shakespearean plays every summer, as well as two plays in the fall. “We try to have enough variety so that people look at this as a smorgasbord,” Adams says. But, he adds, “Shakespeare is my favorite playwright to direct, without question. He’s the most challenging, and as a result you’re never bored.”Even with the recent glamour of a Tony Award for Outstanding Regional Theatre, Adams is quick to trace the success of the festival back to the arts-loving people in Cedar City, who have supported his project since it began. “I’ve got to tell you, these people know their Shakespeare,” he says.

Utah’s Lieutenant Governor, who just served as her own intern, has returned to BYU to finish her bachelor’s.

Empire of the Sultans

The Ottomans are not only defined by their ability to conquer but also by how they worshipped.