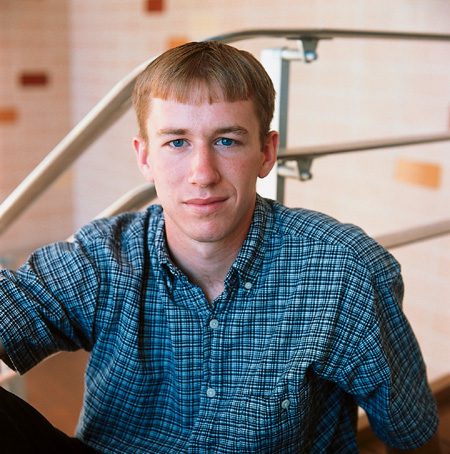 AS the bustling throng of students hurries across campus to their next class, Ari D. Bruening, ’02, fits right in with the crowd. Clean-cut, athletic, and bright, Bruening is a full-time student, a research assistant, and an editor for Aporia, the undergraduate philosophy journal. He appears to be a talented, but typical, student. If you stop and talk to him, though, you’ll start to notice something a little different about this 22-year-old. He’s smart. Very smart.Here’s the proof: Bruening, a BYU senior, was one of 13 students nationwide to receive a perfect 180 on the LSAT in June.To prepare for the exam, Bruening decided to forego the traditional prep courses and study on his own for two months. The method paid off—on his six practice exams, Bruening scored an average of 178.Bruening also believes that his training in philosophy helped him ace the LSAT, as the law school entrance exam tests students’ aptitude for logical reasoning. “Philosophy 205 is better than any LSATprep-course you could take,” he says.Despite all his preparation, Bruening admits that he was shaking as he waited to hear his score on “the four-hour test that determines the rest of your life.” As it turned out, all his jitters were unnecessary. Bruening’s philosophy professor, David L. Paulsen, ’61, says although he expected Bruening to score high, he was still very impressed with the perfect score. “I’ve only had one other student besides Ari receive a perfect score in the 30 years I’ve been at BYU,” he says.In spite of attention he has received for his score, Paulsen says Bruening is a “quiet, down-to-earth kid.” “He didn’t even tell me about the 180,” says Paulsen. “I read about it in the newspaper.” Besides, this is not the first time Bruening has been “perfect” in his academics. He has maintained a 4.0 since ninth grade and he scored a perfect 36 on his American College Test (ACT).Bruening’s siblings have a similar track record. His older brother and sister also aced the ACT, and two other brothers received perfect scores on the Graduate Records Examination (GRE).While Bruening recognizes genetics’ role in his family’s success on aptitude exams, he also thinks the way he was raised increased his ability and desire to learn. “When we were bored as kids,” he says, “we were expected to read, not to watch TV. I didn’t know people watched that much TV until I hung out with my friends.”Although Bruening appears to be a typical college-aged guy, Paulsen cautions, don’t be fooled. “Ari was one of the quieter students in my class, but I found that he has the unique ability to think independently,” says Paulsen. “Ari is able to analyze an issue and come up with arguments that the rest of us, myself included, never even considered.”Paulsen expects, and Bruening hopes, that the admissions boards at Yale and Harvard Law Schools will also see past Bruening’s “average Joe” facade and prove the old maxim true: You can never judge a book—or a genius—by its cover.

At the ripe old age of 19, BYU’s Aleisha Cramer is playing with Team USA’s Mia Hamm and Brandi Chastain.

Some people come to college to learn to succeed. The 2019 essay winner learned something infinitely more valuable.