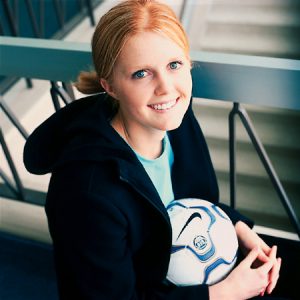 Sophomore Aleisha Cramer is turning heads in the soccer world.ALEISHA M. Cramer, ’04, clad in a white USA jersey, tentatively stepped onto the newly mown field. Yellow uniforms were already darting across the field as the Brazilian national team warmed up. Glancing into the stands, 16-year-old Cramer searched the crowd for her family and friends who had come to see her first game with the U.S. National Women’s Soccer Team. Trying to reduce the shaking of her legs to an imperceptible quiver, Cramer assumed her position on the field and waited for the whistle to blow.“I was so excited to be out there that I don’t think I played very well,” she laughs in retrospect. Now at the ripe old age of 19, playing on the national team with legends like Mia Hamm and Brandi Chastain is a regular part of Cramer’s life. “It’s kind of weird,” she says. “I see Mia on milk and Nike commercials on TV, and the next week I’m playing with her.”And Mia isn’t the only star on the team—Cramer is gaining a superstar status of her own. As the youngest member of the team, Cramer is turning heads in the soccer world. “She is the most impactful player in women’s college soccer today,” said U.S. national team coach April Heinrich to the San Diego Union Tribune. “She changed the game. At 19 years of age, that’s about as good a compliment as you’ll get from me without calling her the next Michael Jordan.”Coming out of high school as the national player of the year, Cramer could have joined one of the top three teams in the country. But BYU‘s spiritual environment, in addition to its nationally ranked soccer team, convinced the 5’10” midfielder to play for the Cougars. “The trip to BYU made me realize the gospel of Jesus Christ was my number one
priority, and in the long run, that was going to make me the happiest.”In her first two seasons at BYU, Cramer led the Cougars to two Mountain West Conference (MWC) championships and garnered the MWC Freshman of the Year award, several All-America citations, the MWC Player of the Year award, and a nomination for the Hermann Trophy—the Heisman of collegiate soccer.Despite the sophomore’s early accolades, BYU women’s soccer coach Jennifer Rockwood, ’89, insists that Cramer doesn’t act the part of the starlet. “Her most important strength is her work ethic. She knows she can always improve and works towards that goal. She doesn’t take her talents and gifts for granted—she works very hard at them.”Between her two soccer teams and the normal demands of college life, Cramer admits that balancing her schedule can be hectic. “You just have to stay on top of things,” she says. “But still sometimes I find myself saying, ‘How am I going to get these four tests done in one day?'”To offset the stress of midterms, games, and practices, Cramer takes time to play the guitar with her roommates, be with her family (who come from Colorado for every home game), and play some of her notorious practical jokes. “Soccer just isn’t worth it if it makes your life miserable,” she says. “You have to keep a balance, and you have to make it fun.”Cramer wants to keep that balance in her life, citing getting married and starting a family on her list of post-collegiate goals. But first, she wants to compete in a World Cup or Olympic game and play in the professional leagues. “Soccer isn’t life, and I’m the first to say that,” she says, “But it sure is fun.”