Something in the Sauce

As a boy Jayson G. Edwards (’06) wrote down what he wanted to do when he grew up—and promptly forgot about it. As a young adult he stumbled upon the old note and saw that he had scrawled, “Selling hot dogs,” among his childhood dreams.

As a missionary in Toronto, Canada, he was reminded of that dream as he wandered past street-cart vendors. Still, when he later created a list of business ideas for a basic entrepreneurship class at BYU, running a hot-dog stand came in at no. 6. “I never set out to become a hot-dog guy,” he says.

But when he ambled by a vacant south-campus shack in 2004, his hot-dog idea shot from no. 6 to no. 1. He pawned his Fender Telecaster, bought the timeworn red shack, and soon opened J Dawgs’s doors—or more accurately, walk-up window. His venture was instantly successful, and the Marriott School presented him with its Student Entrepreneur of the Year Award in 2006. Nearly a decade later, J Dawgs has four Utah County locations and Edwards is closing in on 4 million dawgs sold.

“Sometimes you really do get what you want,” he says.

Someone who is looking to tap into Edwards’s success secrets might be baffled by J Dawgs’s spartan menu: patrons can order beef or polish dawgs, chips, and soda. Yet his south-campus location—now an expanded diner adjacent to the original shack—is known for its lunch-hour lines. Even at 3 p.m. on a Friday, people steadily stream in: groups of 20-somethings, BYU employees in polos, middle-aged couples, a father and his teenage daughter.

The topper options—pickles, onions, jalapeños, relish, and banana peppers—are good, sure, but Edwards’s tangy-sweet special sauce is the major crowd draw. It’s rooted in a recipe his 90-year-old grandmother clipped from an Iowa newspaper decades ago, and “it just kind of evolved from there.”

Though the sauce is a key J Dawgs selling point, Edwards says, “I like to think our customer service keeps our patrons happy.”

James R. Young (MEd ’99), a schoolteacher and BYU security supervisor, was an early customer at the red shack, and he says Edwards and the J Dawgs atmosphere made a fast impression.

The two became good friends, and when Young’s son got married, the family called on J Dawgs to cater the reception. Edwards later did a J Dawgs barbecue for Young’s ninth-grade class and his school’s faculty. And when Edwards learned that Young’s wife
was diagnosed with cancer, he brought them dinner.

“Jayson is a gem,” Young says. 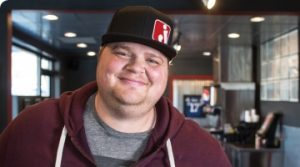 Not a hot-dog fan? Jayson Edwards, who started selling his signature dawgs in a south-campus shack 11 years ago, just might make you a believer. Photo by Bradley Slade.

Edwards, outgoing by nature, builds a natural, warm rapport with patrons as he walks through the Provo diner. “Everything taste okay?” he asks a couple eating at a table. When he’s reassured with an “oh yeah,” he responds with a quick “good,” before checking in with a BYU facilities worker who just finished his dawg. He jokes with employees and enlists them to help his daughters, visiting with him today, earn their snacks. “Penny, you’ve got to work for those, girl,” he tells his 5-year-old after she snags a bag of chips. “Austin’ll give you a job.” Penny sprays and wipes off a few tables; Mae, 8, takes out the trash.

He looks and acts at home here, just feet away from the shack where he got his start more than 10 years ago. Parking then was almost nonexistent, seating was limited, the fridge was too small, and the tiny space—too small for a restroom—was unbearably hot in the summer and frigid in the winter. But when asked if he’ll sell or demolish the shack, his answer is an unwavering no.

“It’s an iconic space for me,” he says. “It’s just a good reminder of where we started.”

As for where he’s going now? He’s approaching growth cautiously—turning down requests to franchise—but hopes to expand to 10 Utah locations over the next few years. In the meantime, the man who’s living his childhood dream says, “The secret is just being content, saying, ‘Yeah, this is incredible. I’ve been really blessed.’”

Household names now among Cougar fans, not one of these playmakers came to BYU on an athletic scholarship.

Read the success stories of students who took advantage of the BYU Center for Entrepreneurship.