By Gordon Laws in the Winter 2000 Issue 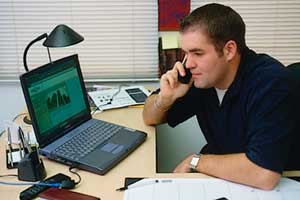 Student Ryan Dame and his partners relied on support from BYU’s Center for Entrepreneurship in founding their Internet company, 360Bay.com

Ryan M. Dame, a senior majoring in marketing, always wanted to work for himself. “I’ve always been the kid on the corner that did the lemonade stand,” says Dame, who grew up in Ontario, Ore.

On a hot day in June, Dame stopped by the office after working out; five hours later he was still there, looking very much like a lemonade-stand kid long shorts, a white T-shirt, short brown hair messed up. But instead of lemonade, Dame was selling Internet services, and instead of talking with passersby, he was cutting deals with agents in Colorado and Salt Lake City. 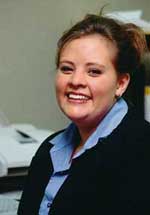 With her cofounders, Rebecca Orser, ’00, won the Utah Entrepreneur Challenge for her business, CityNet. BYU’s 14-year-old Center for Entrepreneurship encourages many student businesses every year.

Dame is an entrepreneur and a partner with his friends Ryan K. Gee, a student at Utah Valley State College, and BYU junior Eric R. Baty in 360Bay.com, a company that puts digital imagery of homes and other products on the Internet for businesses.

Their company like others before them is taking advantage of the BYU Center for Entrepreneurship. The center was started in 1986 by a group of entrepreneurs commissioned by former
BYU president Rex E. Lee. “President Lee said, ‘Act like entrepreneurs,'” says Donald H. Livingstone, the center’s director and a teaching professor in the School of Accountancy and Information Systems. “He said, ‘Every entrepreneur has two things: a great idea and a need for capital. I’ve got the great idealet’s start an entrepreneurship program. Now you go get the capital.'”

The founders did. The program stands on its own with the support of an increasing base of founders who contribute at least $15,000 initially, then $2,500 each year thereafter. The money is used to fund internships and scholarships and to pay for programs such as mentoring, student contests, and entrepreneurial experiences across campus.

“The center put us in contact with a lot of people who have given us quite a bit of feedback,” says Ryan M. Nichols, former BYU student and cofounder of Outdoorsman.com, now called weboutdoors.com. In May Outdoorsman.com, an Internet search engine designed to help travelers find recreational spots and equipment, won the Incorporate This! National Business Plan Challenge, which included a $10,000 prize and a $5,000 scholarship for BYU.

That same month, Rebecca T. Orser, ’00, and her cofounders at CityNet, a company that installs Internet connections in apartment complexes, won the Utah Entrepreneur Challenge and a $10,000 prize. Livingstone says, “Although Rebecca was not a finalist in BYU’s Business Plan of the Year competition, she just kept working and improved her business plan so that when the statewide competition came up, she was a slam-dunk winner.”

While Dame’s, Nichol’s, and Orser’s businesses may continue to thrive, they are hardly the center’s biggest accomplishments. Companies such as 1-800-CONTACTS and MyComputer.com started under the center’s mentoring. And MyComputer.com received additional help when circumstances were difficult.

“When our very first client stiffed us for $4,000, we called the center and found out how to sue somebody,” says Joshua G. James, CEO and cofounder of MyComputer.com. “We filed a lawsuit and in the next couple of days we were paid.”

“They were very giving of their time without any strings attached,” says James of his mentors. “I think it’s just a matter of integrity and a matter of gratitude that you return and help others in the same way.”

The center has been so successful that NASDAQ honored the program with its Award of Excellence, given to seven programs this year. In addition, five of this year’s 30 Ernst and Young Merrill Lynch “Entrepreneur of the Year” finalists had ties to BYU, including one entrepreneur who teaches for the center and two who started businesses with the center’s help.

Livingstone says the center’s success comes from business people who are willing to give with little or no return. “This is just a band of guerrillas who believe in entrepreneurship,” he says, “and we want to give back and help with the next generation of students.”

Facing tuition payments and book bills, a BYU student asks herself whether it’s all worth it.