BYU employees who were dreading the loss of 300 parking stalls due to the installation of utility lines for the new Harold B. Lee Library addition were given a nice 820-foot-long Christmas present.

In December, Jacobsen Construction and DWB Construction completed a tunnel 5 feet in diameter and as long as two and a half football fields stretching between the N. Eldon Tanner Building and the quad north of the library. The tunnel, the largest and longest of its kind in the intermountain area, will accommodate sanitary and storm sewer lines and other utilities. 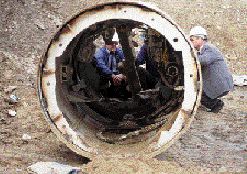 BYU officials examine the head that was used to bore an 820-foot-long tunnel for the utility lines of the library addition.

Because sewage has to drain from the lowest part of a building, and because the library addition is to be underground to preserve the quad, the utility line must be 60 feet underground. The path of the line passes under the parking lot north of the Jesse Knight Humanities Building and across Campus Drive to the Tanner Building. To bore the line, contractors originally planned to use a system that would have required closing the parking lot at least during fall and winter semesters this year.

Steven B. Nelson, senior estimator with Jacobsen, talked with Don Wilson and Jody Baker of DWB Construction, which specializes in boring these types of tunnels. They presented the idea of using a system in which the operator actually sits in the boring head, instead of a remote-operated head system like the contractors had planned to use.

This system gave them better directional control, and a jacking system set up midway along the 820-foot run made digging up the parking lot unnecessary.

“We were trying to be campus friendly,” said Douglas C. Welling, project executive for Jacobsen.

They got a friendly reception from BYU administrators, who had not relished the idea of announcing to employees the extended closure of the parking lot.

Digging the tunnel involved a boring head 5 feet in diameter similar in concept to, but much smaller than, the equipment used to dig the “Chunnel” under the English Channel. As the head turned, electric carts on rails carried dirt out of the tunnel.

Hydraulic equipment then pushed a casing made of 9/16-inch steel in 20-foot lengths into the tunnel, and the sections of steel casing were welded together.

Michael C. Evango, project manager for Jacobsen, said the method used to point the tunnel in the right direction was fascinating. Based on an engineering survey, the crew pointed a laser light into the tunnel. The worker operating the boring head kept the laser dot in the right position on the head, and the tunnel ended up right where it was supposed to.

When it comes to campus parking, demand is high and supply is low. The result? A legacy of hilarious parking stories.

Folk band The National Parks, made up of BYU students, is rocking the iTunes charts.