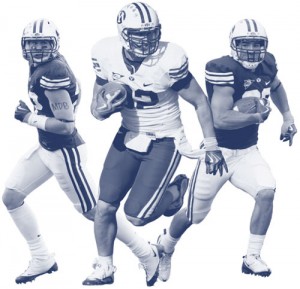 In BYU football’s shocking upset of the no. 3 Oklahoma Sooners on Sept. 5, 2009, back-up BYU running back Bryan R. Kariya (’11) had a 49-yard reception that set up a touchdown. Defensive back Andrew S. Rich (’10) forced two fumbles. And star tight end Dennis G. Pitta (’09) caught four passes for 63 yards on the game-winning drive.

Household names now among Cougar fans, not one of these playmakers came to BYU on an athletic scholarship.

Limited by the NCAA to 85 scholarships, the team is rounded out each year by about 20 walk-ons, players who don pads and helmets for the love of the game and in hopes of earning a scholarship down the road, which happens a lot at BYU.

In Bronco Mendenhall’s five seasons as head coach, 29 walk-ons have gone on to earn scholarships with the team. A former walk-on himself, Mendenhall believes this number may be the highest in the country, though such statistics are not tracked.

BYU’s walk-on-friendly environment reflects Mendenhall’s philosophy: the hardest-working, top-performing players suit up. “With a willing heart and great attitude, [walk-ons] often overcome any perceived limitations they may have in terms of speed, size, or athletic ability,” says Mendenhall.

In support of this tradition, the BYU Cougar Club recently launched the BYU Touchdown Club. Fans can pledge $1 or more for each touchdown the team scores during the season. Proceeds will fund scholarships earned by players who walk on to the football team, freeing money to be used elsewhere.

“These players had a much harder route,” says Michael W. Middleton (BA ’91), Cougar Club executive director, “guys who played one or more years without any financial support.”

Nathan L. Meikle (BS ’06), a former receiver and punt returner, followed a prompting to go to BYU without a scholarship offer. “As a walk-on,” he says, “there are essentially no tangible rewards for all the hard work.” But Meikle says any sacrifices were worth it; he earned a scholarship and gained perspective. “It made me love Coach Mendenhall that much more because . . . he treats everyone the same, regardless of who you are or what you have previously accomplished.”

319,000 Visit the Exhibit Emperors Were Dying to Get Into

An Homage to Female Heroes

How many female greats can you name in this 40-foot mural done by Beatles album-cover artist Jann Haworth?