Three College of Nursing siblings team up to save lives around the world.

Although the Randall siblings live on different sides of the United States, three of them manage to get together every year or so—sometimes at destinations with no electricity or running water but plenty of hustle and bustle. But that’s nothing new for Children’s Surgery International (CSI) volunteers.

“Everyone works nonstop,” Leon P. Randall (ASN ’78) says of CSI, the nonprofit organization he and two of his siblings joined, which provides medical and surgical services to underprivileged communities worldwide. On each weeklong trip, doctors, surgeons, nurses, and anesthesia providers perform close to 150 surgeries on children, repairing everything from cleft palates to congenital hernias that can be lethal if left untreated. In its first five years CSI has visited and revisited communities in Ghana, Liberia, Peru, Mexico, Haiti, and Bangladesh.

The Randall family is particularly qualified to attend CSI missions: of the five siblings in this North Dakota farming family, three graduated from BYU’s College of Nursing and still practice today. Leon is director of surgical services at St. Elizabeth Community Hospital in Red Bluff, Calif.; LouAnn J. (ASN ’78) is a registered nurse at the surgery center in Pocatello, Idaho; and Lynn T. (BS ’83) is a nurse anesthetist at Gillette Children’s Hospital in Minneapolis. “Maybe nursing humans was the next natural step from nursing cattle,” jokes Lynn.

The Randalls’ CSI tradition started with Lynn—or, as Lynn attests, with his colleague, anesthesiologist Richard Marnach. In 2006 Marnach invited Lynn to join the board of directors for the newly formed CSI, which had branched off from Operation Smile. Lynn accepted and went to work organizing volunteers and coordinating travel plans, a role he continues today.

It wasn’t long before he turned to his nurse siblings for ideal volunteers. LouAnn joined him in 2007, Leon in 2010. Lynn’s wife and children came as records personnel on one trip, and LouAnn’s son, nurse anesthetist Dan J. Chow (’05), went on his first CSI mission in January 2012. “We live all over,” says LouAnn. “It’s nice to work together.” 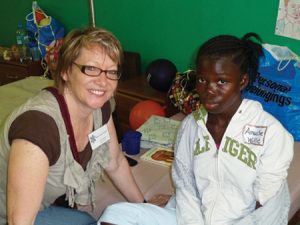 The work the Randalls and other volunteers do makes a huge difference, says Lynn. “So many children cannot get the medical help that they need,” he explains. “There’s no money and no one skilled in doing the repair.” The medical problems have social consequences as well, he adds: many cultures believe that deformities mean a person is possessed, which leads them to ostracize the victims. “Kids who have cleft lips can’t go to school,” says LouAnn. “People won’t even walk on the same side of the street with them.” Even sadder, infants with deformities are often drowned.

“The people are so grateful for CSI,” LouAnn says. “They say, ‘God bless you. God bless you.’” Some families even return to the treatment sites months later to say so: one couple walked and bussed for several days just to be at the hospital when the crew arrived.

The Randalls also spend time training local medical personnel, organizing shipments of white shirts and ties to local LDS wards, and sponsoring young women in school. Leon especially has expanded his efforts beyond CSI, rounding up surplus medical gear for donation. Thanks to supportive hospitals in the United States, Leon has filled six semitrucks with equipment for shipping, including unusual pieces like an isolation chamber, prosthetic limbs—even an ambulance. “I make a request and something appears,” Leon says. “It is wonderful to see the Lord’s hand in things.” As a sign of their gratitude, a community in Liberia recently made Leon an honorary tribal chief, a ceremony both LouAnn and Lynn attended.

Leon, LouAnn, and Lynn agree that their international philanthropic experiences have deepened their appreciation for their own blessings. And they have no plans to stop their family tradition of humanitarian work. “We’ve just scratched the surface,” Leon says.

See CSI’s work in action and find out how to get involved at childrenssurgeryintl.org.

Graduates of BYU’s first nursing class look back on a half-century of healing.

BYU nursing students in the late 1950s got hands-on experience with doctors.