Graduates of BYU’s first nursing class look back on a half-century of healing. 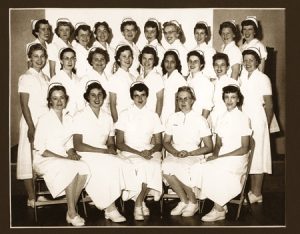 Although the science of nursing has changed dramatically in 50 years, the values that motivated BYU’s first class of nurses have not.

When Janene Ferre Bryson (BS ’56) graduated from BYU’s first nursing class in 1956 and began her career, needles were resharpened, resterilized, and reused. Syringes were boiled and filled again. And lacking formal packets for holding patient information, nurses made envelopes out of newspaper and pinned them to the beds.

“Everything was recycled,” says West Jordan, Utah, resident Bryson, whose long and sterling nursing career ended with her retirement only a year ago.“We even turned our gloves inside out; washed, dried, and powdered them; and then reused them. This is a field that has really changed.”
During BYU’s Homecoming 2006, Bryson joined 13 former classmates to celebrate the 50th anniversary of their graduation. That first class had 25 students, all women. Then as now, the profession is predominantly female, with women making up 92 percent of BYU’s current nursing student body, compared to the national average of 94 percent.
Like Bryson, some of the graduates had careers that spanned decades. Others married shortly after graduation and used their nursing skills primarily within their families.
Jane Bennett Sheldon (BS ’56) of Woodstock, Ill., went on to earn a master’s degree from the University of Utah. She taught for several years, was an associate chief nurse, treated HIV patients, and worked with the Denver Center for Human Caring.

Carol Wheeler Brumfield (BS ’56) of Salt Lake City also taught. She was a clinical instructor at BYU for 16 years and ended her career as the director of Women and Children’s Services at Mountain View Hospital in Payson, Utah.
The career of Elsie Mae Patterson Bryan (BS ’56) took her to Primary Children’s Hospital in Salt Lake City, where she served as director, and to the National Guard and Air Force Guard, where she was a flight nurse and part of a team that traveled the country to inspect medical units. “I had a wonderful career,” says the Ogden, Utah, resident.
Mary Lee Peterson Sieverts (BS ’56) of Sandy, Utah, said she got her first job because she told the staff at the Seventh-Day Adventist hospital where she was interviewing that she lived her religion. “They said they hired me because I had the same standards they did,” she explains. Amid other nursing positions, she spent 15 years of her career at Cottonwood Hospital in Salt Lake City.
For Pearl Rogers Reyne (BS ’56), of Mesa, Ariz., the choice to become a nurse was natural. “My mother had been a midwife in northern Arizona, and she always talked about the joy of nursing,” says Reyne. “While my mother died when I was 12, her influence stayed with me, and I always knew I wanted to be a nurse.”
Reyne’s own work included everything from filling sawdust furnaces, heating ovens, managing admissions, and filling prescriptions in a small hospital to, yes, nursing.
Gayla Lloyd Dye (BS ’56) of Uintah, Utah, says she probably would have preferred the fine arts, but after a year of art classes, she ran out of money for supplies and selected nursing as an alternative.
Evelyn Falslev Larsen (BS ’56) of Brigham City, Utah, entered BYU without a major in mind. When someone suggested nursing, she thought that was a good choice, and she became the first member of her family to graduate from college. For one of her last jobs, Larsen worked with Alzheimer’s patients. “I worked there until they couldn’t tell me from the patients,” she says.
As the women exchanged hugs and got caught up on each other’s lives, it was clear they had been good friends. “We were more like sisters than classmates,” says Geraldine Johnson Anderson (BS ’56) of Tustin, Calif., who worked as a school nurse for 15 years and has helped with blood banks.
Like her classmates, Pearl Reyne considers her years as a nurse as the glory days. “We could really focus on caring and patient service. And loving those patients is what it was all about,” she says.

These Cats Can Dance

A Rolex-obsessed rap duo sought out Cosmo and the Cougarettes for a halftime collaboration.

The 7 Habits of Highly Effective Thespians

An emphasis on family values is Take Note’s founding principle.

One of These Things Is Not Like the Others