By Erick Carlson in the Fall 1999 Issue

Will my children drive noiseless cars? Can anyone make a dishwasher that runs silently? Will jets always be so loud? Though a world without these daily disturbances seems to border on the realm of science fiction, answers to these questions just might be found in a growing area of acoustics called active noise control. Scott D. Sommerfeldt, an associate professor of physics, is at the forefront of active noise control research and the struggle against noise. 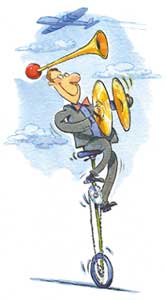 creating equal and opposite secondary waves to cancel out the primary sound. Sound waves are similar to water waves except that the disturbance occurs in air. If two pebbles were tossed into a pool, the waves they generated could meet and possibly cancel each other out. This principle is known as destructive interference. The whole point of active noise control is to match up the positive and negative disturbances, or pressures, created by sound waves and thus to neutralize noise. Sommerfeldt explains, “Pressures add together just like numbers do, so if you have a 2 and a -2, then you’ve got zero.”

The concept was patented by German scientist Paul Lueg in the 1930s, but since active noise control requires measurements more precise than he could obtain with vacuum tubes, the idea didn’t fly. With the advent of computer chip technology and digital signal processing chips, active noise control was reborn in the mid-1980s.

Sommerfeldt entered the field in 1986, just as research was gathering steam. He says digital signal processing is the key to an active control system. After microphones pick up the sound waves, the digital signal processing chip, in “typically a millisecond or less, will do a whole bunch of number crunching to figure out what sound you ought to be creating and send out the signals to your speakers.”

Active noise control can be applied in many situations where there is unwanted sound, from dishwashers to cars to aircraft engines. While teaching at Penn State where he got his PhD, Sommerfeldt created an active control system for the Magnetic Resonance Imaging (MRI) machine. The noise created by the machine can be bothersome to a sick patient confined inside it. Active noise control brought the sound down from the level of a shout to the level of a normal speaking voice, a decrease of about 20 decibels.

Sommerfeldt is currently working with General Electric Aircraft Engines and Hersch Acoustical Engineering on a project that may reduce the tonal noise of jet engines. Active noise control may be the best option for producing engines that meet future FAA noise standards, he says. The project is funded by NASA’s John Glenn Research Center in Cleveland, which houses a facility designed to simulate the acoustics of a jet engine. “We do all of the development here and work through all the bugs, and when we’re ready for tests they have this massive test facility at John Glenn,” says Sommerfeldt.

The active control system for the simulated jet engine uses up to 90 microphones and over 100 speakers. Working with all those variables can be a real headache, Sommerfeldt says. “It’s pretty intense. I was in charge of all the control systems, so I’d be ripping my hair out if things didn’t work quite as advertised.” Still he was able to accomplish the things he set out to demonstrate.

Sommerfeldt was introduced to acoustics by his clarinet teacher in high school. After completing his bachelor’s degree in music education, he earned a master’s degree in physics at BYU, and after his time at Penn State, he returned in 1995 to become BYU’s first professor to specialize in active noise control. “He’s recognized now both nationally and internationally,” says William Strong, associate chair of BYU’s physics department.

In December Sommerfeldt will serve as chairperson for the biannual International Symposium on Active Control.

Sommerfeldt is quick to point out that active noise control is not going to solve the world’s noise problems. He sees cost as a factor that limits potential applications. “It’s still an expensive technology,” he says. “We haven’t got as fed up with noise in our society yet that we’ll put that kind of money into it.”

And progress is slow–noise doesn’t disappear overnight. Laralee Ireland, a doctoral candidate from Lindon, Utah, is currently doing numerical analysis with a computer model of a jet engine. When others ask about her research, Ireland says, “I tell them I’m making quieter jet engines. And they say, ‘Great. We’re not going to hear the jet going across the sky.’ That’s not it at all.” Silent jets aren’t coming any time soon, Ireland says, but if a jet’s noise level can be reduced by even five decibels, “People will be really happy in the jet engine industry.”

The painstaking research involved with active noise control may not be the stuff of science fiction, but each success leads farther into the realm of possibilities. “When you actually see it work, it’s impressive and exciting,” Sommerfeldt says. “You’ve got this sound or vibration and then it’s virtually gone.”

Masada: Whispers from the Dust

Objects from the ruins of Masada help piece together the storied history of Roman Israel.