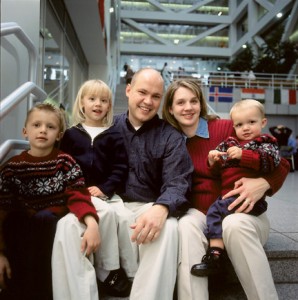 John T. Higginson, ’02, has not slept a whole lot in the past few years, but you wouldn’t guess it by looking at the face that his classmates and professors describe as “always smiling.”

As a BYU undergraduate double-majoring in international politics and Chinese, he balanced responsibilities as a full-time student, full-time supervisor of operational activities for the U.S. Postal Service, and father of three children. He started his MBA program with an emphasis in supply chain in the fall of 2002, and soon thereafter became president of the Supply Chain Management Student Association, helping fellow students get practical experience, internships, and jobs.

It’s that cheerful personality that helped him beat cancer when he was 21, and it’s that cheerful personality, say Marriott School faculty and students, that won him the prestigious Hawes Award—a $10,000 pat on the back given to 10 MBA candidates based on input from MBA students and faculty. Students nominated must exhibit strong personal values, excellent academic records, and business prowess.

“John is very concerned about fellow students, and he’s willing to make great sacrifices to serve other students,” says William J. Sawaya, associate director of the MBA program, who worked with Higginson as the advisor for the Supply Chain Management Student Association and as a professor. “He’s not a selfish person at all. I think the award was given to him on that basis.”

Adds Carol Thornton, ’01, MBA program admissions coordinator, Higginson “is not only intelligent and a capable leader but is also very generous with his time and talents.”

But not all of his selflessness is focused inside the Tanner Building.

“John will leave a class early to go see his kids play a soccer game,” says Gary Hyatt, ’86, one of Higginson’s classmates who nominated him for the award. “So many people are here from 6 a.m. to 9 p.m., but his priorities in life are straight. He knows that the family’s important, and at the same time, he does a very good job in the academic work that he does. He’ll go the extra mile, and he doesn’t give up.”

Higginson, who says his biggest achievement will be to graduate with four kids (his fourth was born in March), is definitely a family man. He attributes that, in part, to the experience of losing his 16-year-old brother in a car accident they were both in when he was 11.

“It was devastating, but it brought our family so close together and made us rely on the Lord more,” he says. “From that point on we set a goal to see him again, and that really deepened the concept of eternal families for me.”

As for his accomplishments, Higginson characteristically deflects praise and points to Tawnie as his motivation.

“She really has been the driving force at getting me through school,” he says.

“I think the thing that impresses me most with John is the genuineness of his character,” says Sawaya. “There’s nothing political about him, nothing showy. With John, what you see is what you get—great integrity, great strength of character.”

Higginson will graduate in April and begin work with O.C. Tanner, a Salt Lake City-based employee recognition solutions company, in May. And although the money he received from the Hawes Award has already been put toward student loans, he says the award will nonetheless serve as a motivator in his future.

Krista Oakes has built a support network for Church members dealing with infertility.

BYU exceeds the benchmarks set by 470 institutions across the nation.

Piecing Together a Life

It wasn’t until he asked about the war that Ron White truly came to understand his stepfather.