Masada: Whispers from the Dust

Ancient artifacts that speak in whispers will soon tell their story in a unique exhibition that is coming this March to Brigham Young University. This collection, which is permanently housed at the Hebrew University in Jerusalem and dates from the days of Herod the Great until a.d. 74, tells the story of Masada, an ancient natural fortress located on the west bank of the Dead Sea. It is a complex story, one that has both stirred controversy and inspired millions of Jews, both in modern-day Israel and throughout the world. 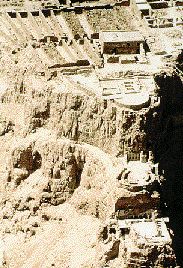 The artifacts that will be exhibited in BYU’s Museum of Art are somewhat akin to the history of Masada, says John W. Welch, a BYU professor of law and the editor of BYU Studies. “Much of the history of Masada, as well as this exhibition, has been put together from fragments,” says Welch, who, with Marti Lu Allen of BYU’s Museum of Peoples and Cultures, is largely responsible for the exhibition’s first appearance outside of Israel. “Like archaeologists who reassemble shards of pottery to reconstruct history, those who study Masada and those who will view this exhibition will weave out of the remains of this ancient fortress a story that has unique meaning to them.”

The artifacts range from pieces of fabric to pottery to lamps like those referred to in the parable of the 10 virgins. They represent both the life and death of a group of Jews who rebelled against Roman rule, leading to the Roman’s destruction of Jerusalem. And they are reminiscent of the rich symbols replete throughout the New Testament.

The word Masada comes from the Hebrew word mesad, which means fortress. This natural rock fortress rises some 1,300 feet above the ground below, and its summit, until a modern-day tram was installed, was reachable only by a very steep and difficult climb. Many biblical scholars believe Masada is where David hid from Saul in Old Testament times (see 1 Sam. 23:29; 24:22), and it was used as a fortress by the high priest Jonathan, the brother of Judas Maccabeus, from approximately 160 to 142 b.c.

Herod the Great included Masada as part of a series of fortresses he built in the deserts and hills of Judea, with each serving a strategic function for Herod and his family. He likely chose Masada not only for its natural fortification but also because the site had been used by rebels who had risen up against his father and who had withstood all attempts to overtake them–until they ran out of water.

At Masada, Herod constructed on three levels a luxurious villa with commanding views, as well as seven palaces, defense walls, and an elaborate system of channels that funneled every possible drop of rain into 12 large cisterns cut into the cliffs of Masada. He also constructed multiple storage houses and filled them with provisions that would have lasted his family for years. The workmanship was so elaborate that some said Herod’s palace was lined with pure marble, when in fact it was constructed of plaster painted to look like marble. 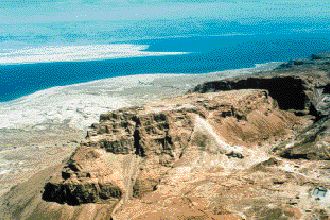 The ancient fortress of Masada, overlooking the Dead Sea.

A part of Herod’s family lived at Masada for a time, although little is known about whether Herod, who died in 4 b.c., ever lived there himself for any significant period. What is known, however, is that a Roman garrison was occupying Masada at the beginning of the Jewish revolt in a.d. 66, a revolt that led to the destruction of Jerusalem and its temple in a.d. 70. The Roman garrison was expelled by a faction of Jewish Zealots known as the Sicarii for the short dagger they wore under their clothing (sica in Latin) and who wanted the protection–as well as the provisions–that Masada provided.

The only significant account of the Sicarii’s occupation of Masada comes from the writings of Josephus, a Jewish commander who became a Roman historian after his surrender to Roman troops in a.d. 67.

Close to 1,000 members of this group lived on the summit of Masada, where they subdivided Herod’s palaces into living quarters, grew crops in the top soil his workers had hauled to the top of the peak, lived off provisions the Romans (and Herod) had left behind, and raided local villages when they had need of more supplies.

Until the destruction of Jerusalem, those Jews who had fled to Masada played almost no role in the Jewish revolt, but after its fall, Masada was one of three fortresses that was still occupied–and that posed a threat to the Romans. The first fortress fell quickly, and the second then surrendered, leaving Masada as the sole refuge for fleeing Jews–and as the last pocket of Jewish resistance against Rome. 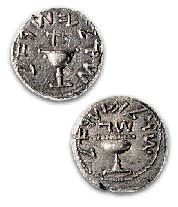 Silver shekels coined by the Zealots during the Roman-Jewish war.

Josephus provides the only account of this tragic event; in fact, he retells in great detail the speech the Sicarii’s leader supposedly gave to the people before they slew each other. (Two women and five children survived this mass suicide by hiding in an aqueduct and may have provided Josephus with some of the details of Masada’s last hours.) According to Josephus, Eleazar ben Yair admonished his followers to choose life instead of slavery and to serve God alone, rather than the Romans.

Interestingly, Josephus, as commander of a Jewish army, had himself presided over a similar scene, but had, with one other soldier, decided to surrender to the Romans when it came time for them to take their own lives.

Such is the history of Masada, which has become a symbol of valor, courage, and conviction among many modern-day Jews. In fact, Masada–known by many as “Heroes’ Rock”–was the site, in the 1950s and ’60s, of what is re-garded as the largest excavation project in modern Israel, and it is now a destination for curious tourists as well as devout pilgrims. Some of the countless artifacts found at the site have been on display at the Hebrew University on Mt. Scopus, near BYU’s Jerusalem Center.

It was during a trip to the Holy Land in the early 1990s that Welch con-ceived the idea of bringing the exhibition to BYU. Together with one of his traveling companions, Alan

Ashton (a founder of WordPerfect whose family foundation is assisting with the exhibition), Welch had visited the site of Masada and then viewed the artifacts on display at the Hebrew University. The two men quickly lo-cated the exhibition’s curator, Gila Hurvitz, who was in her workroom. She readily expressed interest in Welch’s idea.

“This exhibition will display the remains of a story that has captured the fascination of people down to the present time,” Welch says. “But they are fragments, so you have to come knowing something of this story so that when you see one of the braided locks of hair that belonged to one of the women before she was killed, you will know what you are seeing.

“Many of the artifacts, though found at Masada, shed light on what we read in the New Testament as well. There are sandals, for example, that were worn by Palestinian Jews in the same decade that Paul walked on the Temple Mount, probably wearing similar sandals. Or that John the Baptist referred to when he spoke of not being worthy to loose the latchet of Jesus’ sandals.” 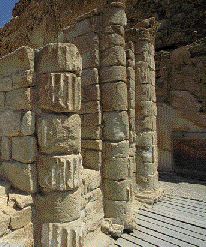 Welch also tells of oil lamps that were used in the first century and of Roman weapons that would be like those referred to by the Savior when he proclaimed, “Put up again thy sword . . . : for all they that take the sword shall perish with the sword” (Matt. 26:52). Such artifacts will reveal much of a king who built a magnificent palace on the top of a desolate peak and of a people who placed their beliefs above all else.

“We don’t know exactly how to characterize these people,” Marti Lu Allen points out. “Were they hoodlums, were they rebels, were they righteous zealots, or were they fanatics? There is considerable disagreement among scholars on this point, and those who visit the exhibition will have to decide for themselves who the Sicarii were and what the story of Masada means to them. But this is a story worth understanding–and seeing.”

To aid those who come to the exhibition, Welch and the staff of BYU Studies have prepared a special issue of the journal and an English translation of the Hebrew catalog that together examine the story of Masada through the eyes of both LDS and non-LDS scholars.

The exhibit will also feature original Dead Sea Scroll materials–some of which were found at Masada, which is approximately 30 miles south of the caves of Qumran. These scroll materials will be accompanied by a demonstration of the interactive CD-rom that is being developed by the Foundation for Ancient Research and Mormon Studies (FARMS) and BYU.

“The remnants from Masada and the Dead Sea Scroll materials are artifacts that likely will never be seen in Provo again,” Welch says, “and it has taken the joint sponsorship of BYU Studies, BYU’s Museum of Peoples and Cultures, the Department of Classics, and FARMS to make this exhibit possible.

“People will see as much as they are ready to see,” Welch adds. “This exhibition has the potential to enhance people’s appreciation for the world of the New Testament, to provide 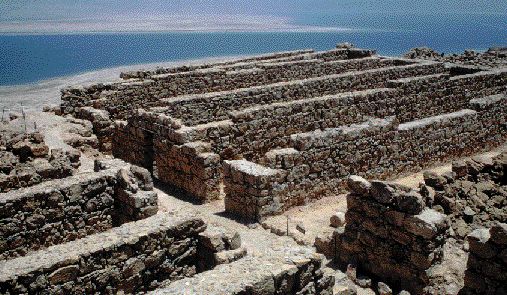 them with a unique exposure to the Dead Sea Scrolls, and to provide insight into a part of history many are unaware of but that, in Christian eyes, was the final fulfillment of the Savior’s prophecy concerning the destruction of Jerusalem.

“Much of this exhibition will be presented in whispers, but these are whispers that all should hear.”

The Masada exhibition is under the auspices of the Institute of Archaeology of the Hebrew University of Jerusalem, with the Israel Antiquities Authority.

A trip to Ghana gave four illustration students a meaningful BFA project, exposing them to the faith of modern pioneers.