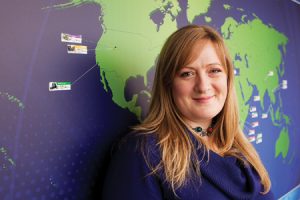 Through a friend, SaraJoy Pond (PhD ’11) heard of someone with a great idea. A woman in Guatemala had started a school for victims of gang violence, but the rented building was in disrepair. A nearby property, however, could accommodate both a school and a soccer field, which the school could rent out to fund its operations entirely. It was the perfect plan, with one problem: no one involved had $500,000 to purchase the property and build the school.
Pond was frustrated. “Money is out there,” she says, “but I don’t know any of the people who have it.” It would take decades, she realized, to accumulate those kinds of resources or connections. “But I’m not okay with waiting decades on problems out there in the world that need to be solved.”

After agonizing over what she could do, Pond woke up one morning with an idea of her own: she didn’t know anyone with a half a million dollars, but through social networking, she could reach half a million people with one dollar.

That was in November 2008. By January 2009, she had a business plan for Tipping Bucket, a fundraising organization that went on to win the Marriott School’s Social Venture competition that April. With the winnings, and with her undergrad experience in graphic design and journalism, she went to work on the Tipping Bucket website. Launched in March 2010, it’s raised more than $100,000 in small donations, funding 30 projects in 20 different countries.

Most nonprofits look for big donors, or at least for donors who can give $10 or more. What sets Tipping Bucket apart is the notion that lots of small donations—even donations of $1—can make a big difference. Specific project plans, like the one for the school in Guatemala, are carefully chosen by Tipping Bucket and posted to the website. Users can then read about each project, and if they think it’s a good idea, they can pledge a donation. The website is updated as each project’s “bucket” accumulates donations, encouraging users to donate a few dollars more or to share the website with others as a project approaches its goal. Only when a project’s financial goal is met are the pledged donations cashed in and given to the project planners—donations go only to projects that are actually going to happen.

“If you get enough of them together, all the ‘drops in the bucket’ can actually make a difference,” says Pond.

After finishing her PhD in instructional psychology and technology, the Colorado native plans to stay in Provo and continue her work on Tipping Bucket, though, geographically speaking, she’s been advised to move. “Virtually everyone I talked to told me I needed to leave, to go to the Bay Area or Silicon Valley, where everything is happening for organizations like this,” says Pond. But with the willingness to serve Pond sees among fellow members of The Church of Jesus Christ of Latter-day Saints, especially among returned missionaries and students, she feels strongly about staying put. “We have this desire to help, along with confidence that God can help us do big things,” she says. “Who could be better leaders in solving world problems?”

In a purple sweatshirt rather than a uniform, Alexis Kaufusi still joins the team huddle while fighting cancer.

Once well known as a best-selling gather and national television personality, Dian Thomas is making appearances.