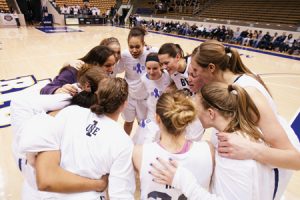 In a purple sweatshirt rather than a uniform, Alexis Kaufusi still joins the team huddle while fighting cancer.

Sophomore forward Alexis E. Kaufusi (’12)—“Fus” to her teammates—reminds her coach, Jeff Judkins, of Karl Malone. “She is one player who can score so many different ways,” says Judkins. And she is tough. Last year she ranked first on the team in field goal percentage and posted two double-doubles.

But this year, Kaufusi sat out the last third of the season, including the final home game—in which BYU won a share of the MWC regular-season title—cutting the net down after the victory wearing jeans, not a uniform. In February she was diagnosed with non-Hodgkin’s lymphoma, a cancer that develops in the lymph system. Though treatable, Kaufusi’s condition benched her for the rest of the season.

And yet, Kaufusi attended every home game of the Cougars’ 15-1 conference season and, a week after her first chemotherapy treatment, traveled with the team to the MWC Championships. “She’s been here every single second she can be,” says Haley Hall (’11), a team captain. “Fus is one of a kind. She’s always making somebody laugh, and she lightens the mood.”

Kaufusi remains tough as ever. “The difference between me and everyone else with non-Hodgkin’s is that I’m 21,” she writes on a blog that follows her battle. “I’m young, and I have a lot going for me. And I refuse to give up!” Her teammates say they never hear her complain and draw strength from that. “We’re planning on her coming back and playing next year,” Judkins says. “She has a strong faith and belief that she’ll get through this, and so do we.”