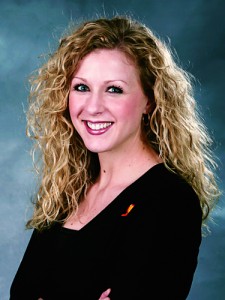 The bright orange pin Natalie Camille Johnson (BS ’02) wears is a constant reminder of her skin cancer awareness achievements. For six years Johnson has educated the public about this deadly but misunderstood condition, and she recently helped create this symbol to call attention to the disease.

“I felt it was important for skin cancer awareness to have this symbol,” Johnson explains. “Having a unified symbol can have a great effect on a single cause.”Johnson’s cancer interest developed when her brother Eric died from complications associated with malignant melanoma, the deadliest form of skin cancer. “I am trying to do something with that tragedy,” she says. “Bad things happen to everybody. Instead of letting the grief and sorrow of the situation overcome me, I decided to find something positive and use it to do something good for other people.”Johnson has educated thousands about this preventable disease. As Miss Utah in 2002, she focused on skin cancer awareness. This year she was a keynote speaker at the American Academy of Dermatology’s annual Melanoma Monday event in New York City. “They had me give a personal perspective on how my brother’s diagnosis of malignant melanoma affected my life.”Johnson, who served in leadership positions in the BYU Cancer Awareness group for three years, says service was “always emphasized throughout my BYU education and has been ingrained as a part of me.”

For 50 sunrises and 50 sunsets, four bicyclists took to the open road, logging an average of 70 miles per day.

Not all ladybugs were created equal, according to BYU research on the tiny predators.

From conference announcements to rivalry victories, BYU Cougar fans had a lot to cheer about this fall.