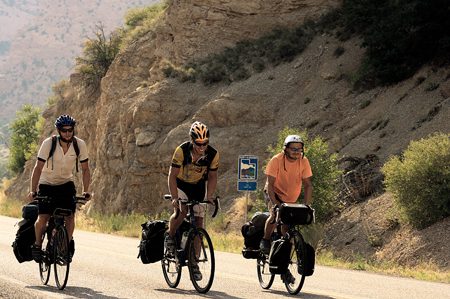 For 50 sunrises and 50 sunsets, four bicyclists took to the open road, logging an average of 70 miles per day in a coast-to-coast cycling adventure. The goal was to raise money to fight cancer, a disease that took the life of Devin K. Mattson’s (’09) father. Mattson hatched the cross-country plan with Maksim Kalashnikov—a recent graduate of Harvard Business School whom he met while climbing Mount Kilimanjaro. Kalashnikov’s grandfather was also a victim of cancer. Mattson convinced two of his BYU buddies, John E. Lattin (’09) and Troy C. Richey (’09), to join the ride. The group left New York City on June 24 and arrived in San Francisco in mid-August.

$7,900 raised for the Lance Armstrong Foundation

Tracey and Larry Long build the spirit of the Y in Las Vegas.

The meaning of Alumni Association chapters goes much deeper than connecting alumni with the university.

Seven pregnant dancers at BYU joined together in dance, claiming their identities as both dancers and mothers.