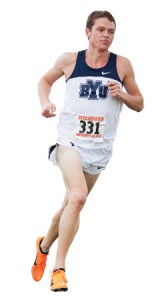 For 30 years, two-time Olympic athlete Douglas F. Padilla (BS ’83) held the BYU record for the indoor mile, a time of 3:56.6 that he ran in 1981. But in February, the appropriately named Miles B. Batty (’12) beat the longstanding record with a time of 3:55.79. It was Batty’s first mile recorded under four minutes, a barrier few runners ever break. In fact, Batty is one of just six Utah natives to do so—and Batty’s time bests those six by a stunning three seconds. Then, at the NCAA Indoor Track and Field Championships in March, Batty won the national indoor mile title with a time of 3:59.49. The previous day, he ran the mile for BYU’s distance medley relay team, which also claimed the NCAA title and broke that BYU record by more than four seconds. The next week he was named the National Men’s Indoor Track Athlete of the Year by the U.S. Track and Field and Cross Country Coaches Association.

Surprisingly, Batty has spent most of his BYU career training for the 5K—not the mile. “I guess I’ll be doing [the mile] more,” he says with a smile. Batty is also an accomplished cross country athlete, and in fall 2010 he won the MWC Cross Country Championship and finished 15th nationally.

A double major in neuroscience and exercise science, Batty plans to go to medical school, but running is in the picture as well. “The Olympic trials would be after my senior year, so I’ll give it a shot,” he says. “I just keep trying to do my best right now and try not to get too caught up in what could happen.”

Padilla, now an administrative assistant on BYU’s track and field staff, thinks Batty has the potential to go far. “He’s positioned himself as one of the premier milers in the nation right now,” says Padilla. “Everybody is definitely looking at Miles.”

After a mission left him doubting he would ever compete again, this athlete now has a bigger goal—the Olympics.

Running Away with the Title

Michaela Mannova led the Cougars to their third national title in five years.

Where the Run Begins

Tackling mountains or marathons, the Harper family shares a passion that runs deep.