Running Away with the Title 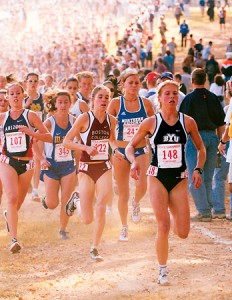 Michaela Mannova led the Cougars to their third national title in five years.

AT the beginning of the 2001 season, Patrick E. Shane, ’71, head coach of BYU‘s women’s cross country team, was unsure how the season would play out. “We have a good team but it’s also an unproven team,” he said.But on Nov. 19, the women proved themselves in a decisive victory at the NCAA championships. The Cougars won by one of the largest margins in NCAA history, finishing with only 62 points and outdistancing runner-up North Carolina State by 86 points.“It was the best overall team performance I’ve ever seen,” says Shane. The Cougars ran in a tight pack, with five runners separated by only 30 seconds, and all placing in the top 25. “Our women were simply stronger than their competitors,” says Shane. BYU‘s transfer students led the team, with sophomore Michaela Mannova completing the 6K course in 20:42 for a fifth-place finish, and Jessie A. Kindschi, ’03, finishing seventh just seven seconds later.As coach of the only BYU program to win three national championships and with only one senior graduating this year, Shane might be back at the championships next year. But for now, Shane is enjoying the moment, not forecasting the future. “This is a dream come true,” he says. “You have to savor a win like this because you never know when it might happen again.”

A Run for Ryan

BYU life sciences researcher finds extra benefits of endurance running that might just motivate you to hit the pavement.