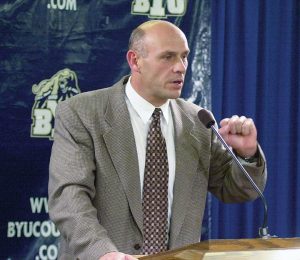 New football coach Gary Crowton comes to BYU with NFL experience, a strong Division I record, and a reputation for innovative offense.

“If I was playing at BYU, I’d be foaming at the mouth right now,” said former Chicago Bear and Cougar receiver Glen A. Kozlowski, ’88, who praises BYU‘s selection of 43-year-old Crowton as the new head football coach.

Kozlowski should have a handle on the hire. He’s a radio and TV commentator in Chicago, covering the Bears where Crowton worked as the offensive coordinator the past two seasons.

“As we begin a new era of football at BYU, I can think of no other person who is as qualified and prepared to take over a program that has been under the direction of a living legend,” said BYU President Merrill Bateman when introducing the new coach.

Crowton turned down several college jobs last year to stay with the Bears. But when BYU came calling, he took a hard look at his life—which has included living in 15 houses in 15 years—and decided it was time to find a home.

“This is an exciting time for me and my family,” said Crowton. “I have always dreamed of coaching at BYU. To follow in the footsteps of a legend like LaVell Edwards is both incredibly humbling and challenging.”

Prior to working with the NFL‘s Bears, Crowton was head coach at Louisiana Tech from 1996 to 1998. There he guided the Bulldogs to a 21-13 record over three seasons, including a 9-2 mark in 1997. It was the most single-season wins in Louisiana Tech’s Division I history.

Crowton drew attention in the football world when the small school, routinely kicked around by powerful SEC schools, started putting up big numbers and pulled off upsets of Alabama, Cal, and Mississippi State. His high-octane offense put up 50 or more points against eight different opponents.

“Tech is indebted to him,” said Clint Conque, former running backs coach at Louisiana Tech. “Football exploded there. Fifty schools were flying in to learn what we were doing on offense—Purdue, Colorado, Tulane. It’s like he has an extra chip in his brain.”

What Crowton does, Kozlowski says, is tinker and fine-tune plays. “He’s like a mad scientist, and I mean that in a nice way. If you look in the NFL, every team in the league is running one of Gary’s plays or formations.”

Crowton’s innovation, mixed with his leadership and emphasis on academic work, proved key in the search, said BYU athletic director Q. Val Hale, ’81. “We looked at all the criteria we wanted in a coach, and when we studied Gary’s qualifications, it was almost a perfect fit,” said Hale. “Crowton was a winning, successful Division I coach, which was very important. He has a history of great offensive football, which is something we’ve had here and want to continue. He’s had great success with athletes, both on and off the field. He’s a returned missionary. He’s got about everything we want in a head coach at BYU.”

Crowton grew up in Utah Valley and played at Orem High, Snow College, and Colorado State. His coaching experience includes stops at Boston College and Georgia Tech. He is married to the former Maren Peterson, and they have six children: Dane (14), Tara (12), Jenessa (9), Quinn (6), Mikauli (4), and Toriana (8 months).

Dick Harmon is a sportswriter for the Provo Daily Herald.

Matthew Grey is an anything-but-typical BYU senior from the suburbs of Chicago.

From an ancient Christian philosopher to long-lost papyri scrolls, this lost interpretation of Psalms is noteworthy.