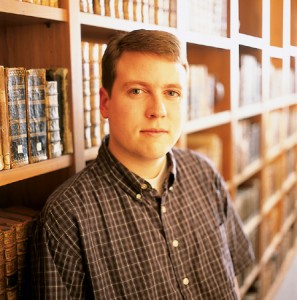 WHEN the door swings open to the third-story apartment in the heart of BYU-approved housing, typical things are strewn about—books and backpacks. The coffee table is cluttered with an assortment of magazines—Sports Illustrated, the Ensign, Biblical Archaeology Review. Biblical what? And there is an Indiana Jones­ style hat hanging in the corner. The collected works of Hugh Nibley complete the picture of modern meets ancient eclecticism. This is the collegiate home of Matthew J. Grey, ’03, the anything-but-typical BYU senior from the suburbs of Chicago. Underlying Grey’s decorating decisions is his love of ancient history and culture. While serving a mission in Santa Rosa, Calif., he and his companion became friends with a group of reformed Jews and would sing the Hebrew prayers and study the Torah. Grey says, “This really cemented a love for the Old Testament.” For Grey, a Near Eastern Studies major, reading the scriptures in the original Greek and Hebrew is useful for understanding the message. “Studying the ancient world and ancient languages helps you to more fully appreciate the meaning of the text,” he says. Delving into his chosen field, he studied at the BYU Jerusalem Center in fall 2000 and returned the next summer to study Hebrew at Hebrew University. One day, after leaving the Armenian monastery they called home, he and his friend Jeremy J. Stewart, ’02, caught a ride on a bus traveling through the West Bank in order to get to an archaeological dig on a kibbutz. They showed up at the doorstep and said, “We’re BYU students interested in archaeology, and we want to dig with you.” The immediate response was not too surprising: “You can’t just show up here. You have to fill out forms and sign up for these things.” They were allowed to dig for one day only—at first. But they were soon asked by the director to stay on for an additional week of excavating. “Since the violence in Jerusalem increased, we were often the only non-natives at the sites,” Grey says. “We spent a lot of time in Gethsemane, at the Garden Tomb, and at the Church of the Holy Sepulchre.” Grey often read scriptures and meditated at the foot of the olive trees at Gethsemane. A paper he wrote, “A Place Called Gethsemane: A Look at Text, Symbolism, and Doctrine,” came from this experience and won him first place in the 2002 Religious Education Student Symposium. Grey created the student journal Studia Antiqua in 2001 with the support of the Student Society for Ancient Studies to give other BYU students the opportunity to publish papers about topics concerning the ancient world. Grey is currently working with associate professor Donald W. Parry, ’84, of Asian and Near Eastern languages on a six-volume reference set for the Dead Sea Scrolls. And this spring he plans to go back to Italy with Richard N. Holzapfel, ’80, associate professor of Church history and doctrine, to study the final journey of Paul. To work with professors like Parry and Holzapfel is one of the reasons Grey came to BYU. He says the atmosphere here “offers not only the academic background to the field, but also a faithful perspective.” Studying the historical setting to sacred writings is his passion, he says, because “once we understand the context we can apply it to the scriptures and receive all the power they have to offer. That’s why I want to study the ancient world.”

An Army of Two

For Matt and Mandy Ellett, national security is a family matter.

From Under the Bed to the Louvre

It’s not every day you’re offered a Rembrandt. Read the story of BYU’s amazing acquisition.