By Charlene Renberg Winters in the Spring 1996 Issue

If colleagues ever say BYU civil engineer Arnold Wilson is a big windbag, he can take it as a compliment.

That is because Wilson is capitalizing on and developing new technology that uses air and inflatable forms to make sizable dome structures for anything from storage structures to church buildings.

Wilson has successfully found a way to safely create domes as large as 800 feet in diameter, more than 500 feet larger than most dome structures of the past.

The professor, with graduate students Scott Jacobs and Jason South, recently engineered a model for these immense air-filled “bubbles” that can be constructed at a price competitive with other building methods—and offer several long-term strength and safety advantages. This research was supported by funds from Monolithic Constructors of Italy, Texas, and Dome Technology of Idaho Falls, Idaho. These two organizations have also been directly involved in air-supported form technology for more than 20 years. 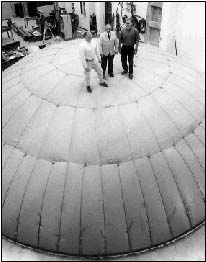 The process begins by building a ring beam as footing. A fabric form is then attached to the beam and inflated, and air pressure maintains the shape during construction. This form, which is made from an extremely strong, nylon-reinforced vinyl material, is left in place as a water-tight finished roof. Polyurethane foam is distributed onto the interior surface just before concrete is sprayed, resulting in a wall of insulated concrete that Wilson says is “virtually impenetrable.”

When reinforced with rebar, the concrete becomes a permanent thin-shelled concrete dome. Such domes can be made large and strong enough to cover football fields, auditoriums, schools, convention halls, churches, and shopping centers.

“Our new methods are revolutionary when it comes to domes,” says the structural designer.

The secret to this breakthrough in concrete dome construction lies in netting sections of huge air-supported membranes that support the concrete shell with lengths of steel cable. In the past, once a structure exceeded 260 feet in diameter, the danger of a membrane rupture became too great to make the structure larger.

Wilson and his students designed a cable netting that restrains the air form and allows higher internal pressure, which is necessary for large dome construction. The net can be in a radial pattern, which Wilson considers the most stable, or in a geodesic design that resembles a honeycomb.

The professor says he is thrilled with the advanced technology.

“I’ve engineered about 600 domes around the world,” says Wilson, “and what other engineers and I have been doing for the last 30 or more years is starting to flower. We all will be seeing a lot more domes.”

Wilson is clearly an advocate of the dome structure.

“Domes are nature’s strongest shape,” he adds. “Compared to any other shape, domes enclose the most volume and have the greatest floor areas, with the least amount of surface area and perimeter.”

When such shells are insulated, they are ideal for structures that need strength, durability, and ease of climate control.

Safety is another attraction for domes.

BYU grads apply their learning to their homework.