BYU grads apply their learning to their homework.

As the mother of four little girls (ages 8 years to 8 months), I constantly use the skills I learned while earning my elementary-education degree. For instance, one night I found myself staring a potential power struggle straight in the eye.

“A show, a show!” my 2-year-old exclaimed when I told her it was time for bed. When I said she could have a show in the morning, she crumpled to the floor and began to wail, “No!”

“No? OK, you don’t have to have a show in the morning either.”

What was it I had learned in my elementary-education classes about avoiding power struggles? Ah yes, give the child power by offering her a choice with options selected by the adult.

“OK, you can have a show in the morning. But before you go to bed, would you like a song or a story?” I asked in my in-charge voice. Soon we were reading a story and snuggling before turning out the lights. Whew! A crisis averted.

I was feeling impressed with my use of psychology in rearing my children until this same precocious 2-year-old came to me with a request one day. Instead of asking if she could have a drink, she said in her best in-charge voice, “Mom, you get me milk or juice?” 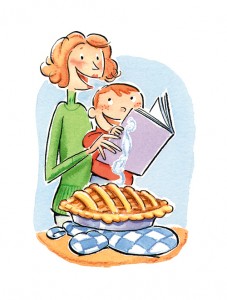 While majoring in illustration at BYU, I had fantasies of moving to New York City and being in hot demand by major publishers. I imagined I would eventually write and illustrate exquisite children’s books and become the next Maurice Sendak or Jan Brett. But during my final semester at BYU, my priorities shifted and I submitted mission papers. Shortly after returning home from my mission, I met my future husband, and my resolve to obtain illustration fame and fortune weakened even more. After we married and started a family, I did a fair amount of freelance work but had never illustrated a children’s book.

Six years ago our second child, Alma, was born. Alma has Down syndrome and significant speech delays. One expert suggested making our own books for Alma. Commercially published books were not suited to his needs since they had too much information competing on a single page. Intrigued, I made stacks of simple books for Alma. A favorite was a book of rhymes. The last page reads, “Hot Pie,” and shows a berry pie cooling in an open window. Alma does not speak, but every time we read this book, he cheerfully yells, “Mop bye,” and then laughs hysterically.

One day Alma’s astonished speech therapist watched as we read these homemade books together. She gushed with enthusiasm, saying that the books were perfect, not just for Alma but for many kids requiring speech therapy. “I really think you could market these books and get them published,” she said. I chuckled to myself, thinking how peculiar it was that a degree in illustration had prepared me to raise a son with Down syndrome.

On a recent trip to Chicago, I couldn’t contain my glee as the concierge informed me that it was “free day” at the Chicago Art Institute. I knew exactly how my three children (ages 7, 6, and 18 months) and I would spend the afternoon while my husband attended meetings. We loaded the fanny pack with snacks and diapers, packed the baby in the rickety umbrella stroller, and made the 10-block trek on foot.

Once there, I determined to do our hard core art viewing first and save the interactive children’s gallery for the final reward. We made our way past the El Grecos and ducked in and out of Degas’ dancers. When we reached Seraut’s A Sunday on La Grande Jatte, I began my lecture on the painting’s virtues with the children’s attention lasting only a fraction of the time I’d fantasized. I could tell I was losing them when 6-year-old Colin—attempting to appreciate dots of color merging into an image—walked backward into other gallery patrons and eventually into the wall. I knew it was time to give up when a mission to retrieve the baby’s discarded socks became a dash and slide race in the midst of the Van Goghs and Picassos.

Guiding my extra-active brood through the art institute had done little to recall my days as a volunteer docent at the BYU Museum of Art’s Etruscan exhibit (1993–94). Still, as I listened to the complaints of sore feet and the cries of hunger all the way down Chicago’s Miracle Mile, I had to smile. I had, at least for a day, lived true to my BYU training in humanities education.

A Useful Branch of Knowledge

As a freshman in 1971, I enrolled in Field Botany 205, taught by Jack Brotherson. The structure of the class required tours around campus to discuss various trees and shrubs. He helped us to appreciate particular characteristics of each, including identification, usefulness, and preferred climate.

During the semester we were tested on the genus and species of various plants—something that has surprising applicability for me as a homeowner 34 years later. I have heard consumers enter a garden center asking, “What do you have in trees?” Then I march up and get peculiar looks when I ask, “What do you have in a Pinus nigra (Austrian pine), and how much are the Gleditsia triacanthos (honey locusts)?”

I was in tears in my living room one April day, miserably pregnant and anticipating a cesarean section in a week—with a long, painful recovery. I hadn’t had enough sleep since our very active toddler was born three years earlier; I could barely walk; and I didn’t know how on earth I was going to take care of my usual responsibilities, not to mention a new baby. On top of it all, my husband was entering finals. I was terrified.

My mother, staying with us to help when the baby was born, had an idea. She got my diplomas off the wall in the back bedroom and arranged them prominently in the living room. “If you had what it takes to do that,” she said, meaning get through seven years of full-time study (the last few under trying personal circumstances), “you can certainly handle another baby.” She told me to look at that wall whenever I was feeling overwhelmed and remember what I have already accomplished. Those abilities have not failed just because I have pursued an occupation other than what I went to college for.

Curtis is 17 months old now, but the degrees continue to hold a central spot in my living room—looking at the wall still works.

The Science of Parenthood

As a stay-at-home mom of five energetic children, I’m sometimes met with a blank stare when I mention my degree in physics. “So . . . do you use that?” I am sometimes asked. The answer is yes.

I’ll admit that my former and current lives might seem like alternate universes. At first glance, the lab humming with state-of-the-art laser technology appears nothing like the crayon-coated chaos of my home. My physics tutorial students never smeared peanut butter on their homework, my colleagues never scribbled marker in one another’s texts, and my professors certainly never shoved crayons down the heat vents to find out what would happen.

But physics delights in finding underlying patterns. The slide toward chaos is a thermodynamic principle in the lab and, albeit more loudly, in my house. My lab mentor and I were too grown-up to giggle while denaturing proteins with high-intensity lasers, but that same giddy curiosity now compels my 5-year-old to dump the fingernail polish remover, use the craft scissors on her hair, and pry open sleeping siblings’ eyelids. “I wanted to find out what would happen” is the rallying cry of all good science.

Fresh curiosity makes a good scientist and a delightful child. Observing iridescence in soap bubbles, butterfly wings, and oil slicks is pure joy. Producing carbon dioxide of vinegar and baking soda in the kitchen sink is great fun. And there are no words for the spiritual satisfaction of absorbing the diamond nighttime sky with my children and testifying that “all the planets which move . . . do witness that there is a Supreme Creator” (Alma 30:44). My study of physics was a testament to me of God’s hand in all things—a principle I see applied in all aspects of my life at home.

Facing tuition payments and book bills, a BYU student asks herself whether it’s all worth it.