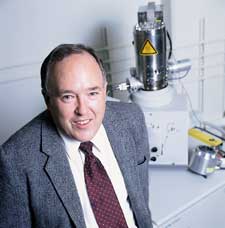 With his adaptation of the electron microscope, mechanical engineer Brent Adams has helped scientists understand – and manipulate – the internal structure of metals and ceramics.

Though his academic peers would call him a materials engineer, Brent L. Adams is actually something of an alchemist. Unlike the medieval experimenters who bore that title, however, he’s not busy attempting to turn lead into gold. He doesn’t even frequent chemistry laboratories. But his research agenda embodies the ancient alchemical premise: transforming a common substance into something special. A professor of mechanical engineering, Adams spends his time looking for ways to give ordinary metals and ceramics extraordinary properties.

“It’s now possible to make materials that are much more resistant to corrosion and cracking,” he explains. For example, the lead in car batteries can be processed in a way that will greatly prolong the life of the battery. Properly processed, the nickel-alloy tubing used in nuclear steam generators becomes far less susceptible to corrosion. Those applications of transformed metals are already in use, and other possibilities are on the horizon.

“I view this as sort of the advent of millennial materials,” Adams says. “We are approaching the point where we will be able to make materials that last longer and will not fail as often. It’s pretty exciting stuff.”

Adams’ role in making such materials is more theoretical than hands-on: he doesn’t spend afternoons hammering on ingots of copper or rolling sheets of aluminum. Instead he’s doing the math and figuring out the physics. His contributions to materials science laid essential groundwork for the inventions mentioned above.

The materials-transmutation process Adams researches is called grain-boundary engineering, and it involves tinkering with the microscopic spaces or “boundaries” between the tiny crystals or “grains” that make up materials like metals and ceramics. A material’s properties (things like strength, elasticity, or conductivity) depend to an extent on the way its microscopic grains are arranged.

So if scientists can manipulate the orientations of the grains—get them to line up in more stable ways, for example—they can alter the material’s properties, in effect customizing it for particular uses.

The idea that grain boundaries could be engineered was first articulated about 20 years ago by Japanese scientist Tadeo Watanabe; Adams is among those working to make the concept a reality.

Adams, age 50, has had a scientist’s curiosity for as long as he can remember. Growing up in Heber City, Utah, he built rockets, ground his own telescope lenses, and collected issues of Sky and Telescopemagazine. After an LDS mission to France, he returned to Utah with instructions from a sister missionary to “stop and say hello to my sister” at BYU. He did, and eventually they married. Adams and his wife, Hilary, now have three sons.

After studying math and physics at BYU, Adams transferred to the University of Utah, where, he says, “I used to do a lot of observing with a 16-inch telescope on top of the physics building.” Then in 1974 he enrolled in a PhD program in astronomy at Ohio State University. But a dearth of academic jobs in his field prompted him to reconsider his emphasis and see “if I could get interested in something else.” Through a fortuitous research arrangement with Ohio State’s John Hirth, then one of the premier materials scientists in the nation, Adams shelved his interest in interstellar distances and started investigating space on the molecular scale.

“I switched all the way from the big picture down to the tiny little picture, inside materials,” he says. “But you know, it’s not so different; some of the physics is the same. Mathematically there is considerable overlap between what I do now and what I was interested in before.”

And it was mathematical work that first brought Adams recognition in his field. During the 1980s he and his students at BYU authored several revolutionary formulas that help scientists figure out how metals are structured at the microscopic level.
Those mathematical functions brought Adams a national award and caught the attention of scientists at Yale University who, in his words, “lured me away.” During four years at Yale, he worked to improve his structure-discerning functions, investigating the relationship between a metal’s microstructure and its useful properties.

Next came the invention for which he is perhaps best known—a modified electron microscope. In a project begun at Yale and continued after he returned to BYU in 1992, Adams and his students adapted the scanning electron microscope so that it could discern the orientation of grains inside metals, making data recovery in their field faster and more accurate than previously possible. Their first paper on the invention was published in 1993; today some 250 of those orientation imaging microscopes are in use at academic and research institutions worldwide.

“That electron microscopy has been used by virtually all the people who have invented new grain-boundary-engineered materials,” Adams says. “We’ve been the enabler for a lot of that stuff.”

Emphasizing that none of his contributions were solo feats, he adds, “I’ve had remarkable students along the way. They were key to all of these developments.”

The microscopy brought him more national awards, and it wasn’t long before Adams was again recruited away from BYU, this time to Carnegie-Mellon University, where he and his colleagues initiated an undertaking called the Mesoscale Interface Mapping Project. Funded by the National Science Foundation, the ongoing project will create a massive database of information about the orientations and energy levels of grain boundaries in selected materials. Adams likens the effort, in its potential impact on his field, to the Human Genome Project: it will greatly expand the options available to scientists working with crystalline materials.

His Carnegie-Mellon colleagues were astounded when, in response to what he considered a spiritual prompting, he and his family decided to return to BYU in 1999.

Hilary Adams says her family’s moves across the country have felt almost like missions; in every location she and her husband have had opportunities for Church service as well as professional growth. And there’s almost an element of inspiration in some of her husband’s inventions. “He seems to have what I call a sense of vision” she explains. “He’ll tell me, ‘Oh, I have this idea,’ and he’ll have the whole idea. He can kind of see ahead—he sees the whole thing laid out in front of him like a blueprint. And then he’ll follow it.”

Now back in Provo for what he hopes is the last and permanent time, Adams is initiating new research projects with colleagues across campus. Richard J. Balling of civil and environmental engineering is working with Adams and associate mechanical engineering professor Larry L. Howell to find out how grain-boundary-engineered materials might be useful in designing compliant mechanisms like the bicycle brake Howell and his students have invented (see “Compliant Mechanisms Make Braking News“). “Brent understands the molecular level of these materials, and he’s trying to bridge the gap from microscopic science to macroscopic design,” Balling says. “The ideas may have a great impact on engineering design.”

“When you design a mechanical system, most of the time you don’t have to worry much about the grain-boundary characteristics,” Adams explains. “But 10 or 20 percent of mechanical design really begins to push the material properties to their limits. It’s when we reach those kinds of materials-limited designs that modern engineers need to know that they can process the material in a different way and improve the properties dramatically.”

While his love of research has not abated, teaching is one of the primary things that drew him back to BYU. “Over the last 20 years I’ve learned how to do so many things, and those things have not yet filtered down to people who really should be able to use them,” he says. “But it’s no small thing to develop the educational vehicle because grain-boundary engineering is a bridge between traditional mechanical engineering and materials science and mathematics. This year I’m teaching probably the world’s first course on grain-boundary engineering, talking to mechanical engineers and trying to teach them enough of the materials part so that I can make the connection. They’ve been a brave group.”

Six students, several of them undergraduates, are now working with Adams on a new mathematical representation for grain-boundary characteristics and, he says, “It’s really fun to see the students start to get excited about ideas. That’s as much fun as I have myself, watching them get jazzed about things.”

Alan R. Parkinson, chair of the Department of Mechanical Engineering, says a teacher with Adams’ experience and reputation is a boon to students. “The students deserve to work with people like Brent who can really challenge them and provide them with an education that’s on a par with the research education offered anywhere,” he says.

Adams believes strongly that grain boundary engineering is part of the future. And knowledge in the field keeps expanding. “Just in the last five years, we in the world community have discovered that a much broader range of change can be obtained in the materials microstructure than we thought was possible,” he says.

“You know, nobody’s going to grain-boundary-engineer a pen or a stapler,” he continues. “But I tend to think that the throw-away society that we’ve been a part of is going to change somewhat. I think of automobiles that could last 1,000 years and could be passed on from generation to generation. I think that computer chips could last more than just three or four years before there are failures in them.”

It may sound a bit like alchemy, but that kind of materials-transforming science isn’t fiction. And BYU’s Brent Adams is poised to help write the story.

This alumni has 250,000 artifacts related to Mexican Church history.

Naval officer and BYU alumnus Doug Herrin shares why he was named Military Engineer of the Year.

A History Lesson in Tree Rings