When military engineer J. Doug Herrin (BS ’01) traveled to Afghanistan in 2008 to build secure bases and police stations for Afghan army and police security efforts, the U.S. Navy lieutenant commander felt he had stepped back in time.

“The villages were about 500 years behind us, with mud houses that lacked running water or sewage facilities,” he says. “While we built many facilities and constructed a school for the kids, I had a hard time visualizing a bright future.” Besides its political unrest, Afghanistan has few natural resources, and Herrin believes maintaining stability will require ongoing aid.

During his year in Afghanistan, Herrin felt continual danger. He remembers standing at the Kandahar Airfield many times in the middle of the night to show respect for casualties from the U.S., Canadian, and British Armed Forces as their bodies were transported from the airfield. Despite the challenges, he appreciated his assignment there and values the great experience he had working with military personnel from other countries.

Herrin was a BYU civil engineering student when he heard about a naval program that could take him around the world to manage projects. Intrigued, he joined the U.S. Navy and has since used his education, including a master’s degree in construction engineering and project management from the University of Florida, to propel a 15-year global career in the military. 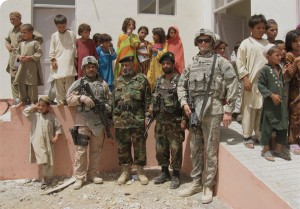 Doug Herrin (far right), local children, and Afghan National Army leaders celebrate the completion of a school in a village just east of Kandahar in August 2008.

Herrin has managed millions of dollars’ worth of planning, design, and construction projects, including 62 earthquake-recovery projects in Haiti and 170 energy projects for Naval Facilities Engineering Command (NAVFAC) Southeast. He also directed efforts to stabilize and repair infrastructure at the New Orleans naval complex that was damaged by Hurricane Isaac.

NAVFAC has honored these achievements by naming Herrin its 2014 Military Engineer of the Year, noting his role as the Southeast contingency engineering and disaster preparedness officer. Volunteer work also factored into his selection for the award, including service as a Boy Scout leader, flag football coach, math competition coach, and volunteer for The Church of Jesus Christ of Latter-day Saints. NAVFAC commander and chief engineer Rear Admiral Kate Gregory noted Herrin’s “dedication, service, selflessness, and technical superiority.”

Much of Herrin’s work involves improving military bases in direct support of American fleets, typified by his efforts in Japan, one of his favorite duty stations. “I loved working with the people there,” he says. “It was deeply gratifying to strengthen the bases for sailors and marines by directing work on the piers where the ships dock, ensuring that the planes had excellent runways, and enhancing the services a base can provide. As always, we were there to do anything feasible to support those who are fighting for safety and quality of life.”

Another career highlight includes his time in East Timor, where he and 25 Seabees from his construction battalion received a visit from the country’s president to thank them personally for erecting schools, medical clinics, and community centers. Also, in Haiti, Herrin created disaster-relief warehouses throughout the region so Haitians will have somewhere to go besides the capital city when disasters strike.

“There’s always a significant amount of work to do,” Herrin says, “and when you travel extensively, you see people who don’t have ready access to clean water, food, or education. Some villagers have no more than a little rice to eat and are really malnourished. I always realize how blessed I am and fortunate to help others.”

“Every place is a little different,” he says, “but each has its satisfactions, because we improve the regions where we serve.”

BYU has a new master's in religious education for military chaplains. Here's how that changes things.

A Royal (and Navy) Army