By Jeffrey S. McClellan in the Spring 1997 Issue

Capt. Michael L. Current, coach of the BYU Army ROTC’s male Ranger Challenge team, stood at the finish line. He and the other coaches and spectators were awaiting the end of the competition’s final event, a grueling 10-kilometer run in which the nine cadets of each team must stay together while running with full combat gear, a 25-pound rucksack, and a weapon.

A group of running figures appeared on the horizon and grew closer. It was BYU’s team, and none of the 10 other teams were even close. As the team neared the finish line with a clear victory, another team’s coach turned to Current and said, “It’s not fair–you guys got God on your side.” 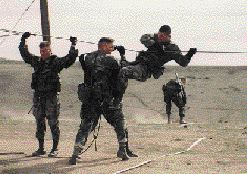 BYU Army ROTC cadets compete in the rope bridge contest, one of eight events in the day-and-a-half-long Ranger Challenge competition. BYU’s male team won both competitions it attended this year.

BYU attended two Ranger Challenge competitions this year and the male team won both of them, bringing home the traveling 100-pound redwood grizzly bear trophy for the brigade championship. In addition, BYU’s female team, the Killer Angels, stunned their competitors as they outplaced several male teams at each of the outings.

The Ranger Challenge is a day-and-a-half-long event that includes a rigorous schedule of competitions designed to test the physical fitness, military skills, and teamwork of members of the Army ROTC. Events range from rifle marksmanship to land navigation to physical fitness, and are challenging enough that team members say they had to reach deep within themselves to find the strength to win.

“A lot of our strength we drew through spiritual avenues, almost more so than physically,” says Aurora Somers, Killer Angels team captain.

Steve Browne, captain of the male team, agrees: “I don’t think there’s anyone that can look back and say we did it all, because we didn’t.”

Consistently among the top competitors nationally, BYU’s Army ROTC program has been part of Ranger Challenge since the competition’s beginnings. In the early 1980s, ROTC cadets at Ricks College organized the first Ranger Challenge contest. The next year, the cadets transferred to BYU and continued the exercise, challenging other nearby schools. The competition drew attention from ROTC leaders and quickly grew to a regional and then national level. In the early 1990s the program was cut back to a more localized level due to budget cuts, but during the six years of the national competition, BYU’s team won the national title twice.

Living up to that kind of a tradition takes a lot of work, and during fall semester the cadets practiced every weekday morning from 5:30 until 7, Tuesday and Thursday afternoons for two hours, and two to 12 hours on Saturdays.

Although there were females who competed on other teams, BYU’s Killer Angels was the only all-female team in the entire southwestern United States this year. Their uniqueness added an interesting element to the competitions.

Maj. Earl W. McNeil, Killer Angels coach and an assistant professor of military science, remembers the beginning of the first competition when the 11 teams marched in formation to the first event. As military troops are known to do, the teams began singing their cadences, but, as McNeil remembers, “One of them was in soprano.”

As the Killer Angels’ voices reached the ears of their male competitors, snickers rippled through the assembly. It only took two events for the snickers to disappear, however, and by the weapons assembly contest, members of male teams were asking BYU’s women for tips.

At the brigade competition, which included 21 teams from four western states, there were once again a few snickers and patronizing remarks, but this time it only took one event to silence the skeptics.

Says team captain Somers, with a satisfied smile, “We were able to show them that, ‘We do the same thing that you do, and we’re good at it. In fact, we’re better than you!'”

Both BYU teams won considerable respect at the competitions, and for more than just their physical prowess.

“The students not only did very well on the events,” says Current, “but they also cheered on the other teams. They kept a really good sportsmanship attitude throughout the competition.”

Many of the other teams tried to talk each other down, but BYU refused to participate. This impressed at least one team, says Current, an assistant professor of military science. “The last thing they said to us was, ‘You guys are a class act.'”

Lt. Col. John J. Sullivan, professor of military science and director of BYU’s Army ROTC program, says the cadets represented BYU and the Church well. And that’s what one would expect from the top students in the program. When he created a merit list of the senior cadets last year, Sullivan found that eight of the top 10 cadets had been members of the Ranger Challenge teams. “The skills that they develop in the Ranger Challenge are those skills that make them successful as leaders,” he says.

Anna Ouchakova: The Difference Between Living and Dying