In an ancient Maya city, the earth yields secrets of the past. 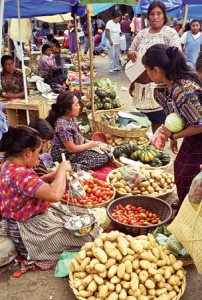 BYU soil microbiologist Richard E. Terry (BS ’72) has been hearing voices. Amid the ruins of an ancient Maya city on the YucatÃ¡n Peninsula, Terry and fellow researchers have picked up echoes from the inhabitants of a city a thousand years gone. He hears vendors hawking obsidian, salt, and maize; consumers haggling down prices on vegetables; and travelers relating their journeys from distant lands.

Analyzing soil samples from an open plaza at the center of Chunchucmil’s sprawling ruins, Terry and graduate student Christopher T. Jensen (BA ’01) found evidence of a marketplace, findings that have turned scholars’ conception of Classic-era Maya economy upside down.

The long-held scholarly view of Maya economy revolved around kings and powerful elites who received goods as taxes and tributes from the lower classes, says Bruce H. Dahlin, a Shepherd University archaeologist and lead researcher on the study. The elites then “redistributed these goods back down the social ladder in the form of gifts.”

But the ruins of Chunchucmil posed perplexing questions. How did the land, with its thin layer of infertile soil and scant rainfall, support one of the largest populations of all Maya cities? And what were researchers to make of a central plaza or the abundance of small pyramids in place of dominating central structures?

Dahlin suspected the city had a market center. Strategically located between the coast and the communities further inland, Chunchucmil, he hypothesized, featured a large merchant class that facilitated the trade of imported goods and crops from nearby communities.

But without archaeological evidence, he couldn’t be sure. So he turned to BYU’s Terry, who has analyzed Mesoamerican soils for the past decade.

“In a way, the chemical residues of ancient activities are just another form of artifact left behind by ancient people,” says Terry, who is particularly interested in phosphate, a chemical that remains in the soil when organic material decays. “The carbon decomposes. The nitrogen leaches away. The phosphate stays put.”

Setting up a grid on the Chunchucmil plaza, Terry and Jensen analyzed scores of soil samples. The results showed an unmistakable pattern. Phosphate levels spiked in a line directly alongside the plaza’s strange alignment of rocks, suggesting that large amounts of organic material had been tramped into the dirt there. The rocks, the researchers surmised, marked locations where vendors would have set up to sell produce.

To test their findings, the researchers gathered soil samples from a modern outdoor marketplace in Antigua, Guatemala. Despite a 1,200-year separation in time, the markets’ phosphate patterns were similar.

When word first got out, the findings were anything but welcomed. “One archaeologist said, ‘If you publish that, I’m going to rebut your work in the literature,’” Terry recalls. But just as the team was preparing the study for publication, other researchers made another major Maya discovery. In Calakmul they uncovered murals of figures carrying wares to what appears to be a marketplace. “Suddenly, a lot of the archaeologists are quite excited by our study,” Terry says.

Dahlin and Terry are pursuing more research to determine the extent of market cultures in Mesoamerica. For now Terry is pleased to have helped create a better picture of life in a Maya city. He imagines a market full of locals and foreigners all dressed in brightly colored garb, buying, selling, eating, and being entertained. “The market would have been a fun place to go to,” he says, “very lively.”

A recent biology grad is sculpting faces atop ancient hominid skull replicas for an exhibit at BYU.

The new library of Provo will continue to be a place of learning.