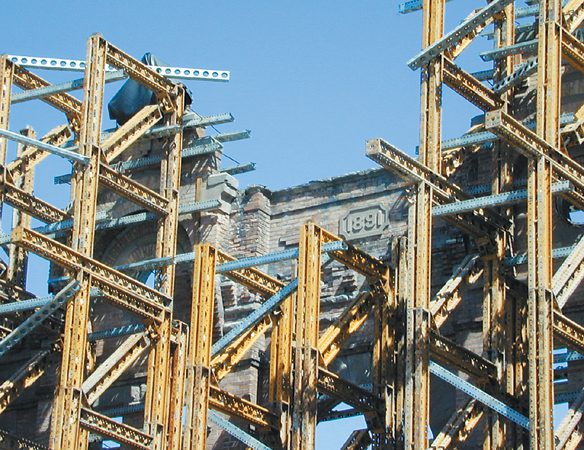 Scaffolding, fences, and renovation crews have surrounded the Academy Building for two years. As the structure takes on a new role as library and community center this summer, it will continue to be a place of learning and discovery.

The Provo City Library had books crammed into its shelves. The old Academy Square buildings were crumbling. Then a miracle happened, says L. Douglas Smoot, ’57, a Brigham Young Academy Foundation member. The citizens of Provo voted to marry the unlikely pair (see “Restoring a Dream” in the Commentary section of this issue.)The Provo City Library at Academy Square, due to open this summer, is the product of two years of intense renovation. Commencing with a groundbreaking July 9, 1999, the Education Building–now known as the Academy Building–has been reborn as a state-of-the-art public library and community center. An eastern addition, standing where College Hall used to be, houses the bulk of the library’s collection.With all the changes, however, Academy Square has retained the atmosphere and many details of BYU‘s former lower campus.“When the scaffolding was up around the building, the workers literally examined each and every brick,” explains W. Eugene Nelson, ’78, library director. “All the brick is original.”Not only is the brickwork the same, the new red metal shingles on the roof were made by the original 1891 manufacturer, which was still in business and still had the original order on file.In addition “the historic ballroom is essentially just like it was: it has a hardwood floor, the four original columns, and the same 13 windows,” says Smoot, a BYU chemical engineering professor and a great-grandson of Abraham O. Smoot (first president of the academy’s board of trustees).The elegance of the building is also preserved by two original academy chandeliers that are now back in one of the new conference rooms. In another conference room, the only stained-glass window from the old building rests in the same west-facing location.“It was missing, and nobody knew where it was,” relates Smoot. “It turns out that some young men had gone into the building years ago and removed the window, thinking the building would be torn down. They sent it to us from California six months ago in pretty good shape.”The Academy Building now boasts another stained-glass piece. In the west wall of the addition, a stained-glass window depicts a woman reading a book by a backdrop of Utah Lake, mountains, and trees.Because the academy’s floor plan was not suitable for a library, the entire inside was gutted. The children’s section of the library is on the first floor, where classrooms and a small theater used to be. The second floor houses administrative offices and meeting rooms, and the third floor contains conference rooms and the ballroom.While the attractiveness of the new library will draw many visitors, its increased resources will also be a magnet. The former library held about 200,000 items. The new space will allow the collection to expand to almost 500,000. Anticipating increased patronage, the library has 80 public-access computers in the adult section–a significant rise from the former 10–and the floor contains a rabbit warren of conduits for networking future computers.The new library also boasts underground parking that wraps around three sides of the Academy Building. With two above-ground lots as well, there are more than 300 parking stalls. And when landscaping is complete, trees will line the perimeter of the library block just as they did in academy days.Even as Academy Square used to be the center of education in Provo, says Cynthia J. Clark, ’91, the library board chair, it will now become a center of culture and learning for the community. “When I go in, there’s not a time I don’t get teary-eyed. To see how it was and to see what it is now is just marvelous,” says Clark. “At first we just intended it to be a library, but now it has turned into an actual community center–something that all the citizens of Provo can enjoy and use.”

By using our agency to learn, we increase our agency—and our ability to do good.

Donations to BYU were at a record high in 2020, providing scholarships and opportunity to students like Savannah Taylor.