Dancing Across the Sea

AT one particular BYU dance while he was an undergraduate, Keith R. Carr, ’57, of Elkton, Ore., could not remove his eyes from an especially beautiful blonde girl with startlingly blue eyes. As he observed her he noticed she accepted invitations for all the slow numbers but declined for the faster dances.He finally figured out she didn’t know the steps and took the opportunity to offer dance lessons. He led her to a remote part of the floor where he taught her the basics of the swing, jitterbug, and other popular dances of the 1950s. Within a semester the lanky farm boy had captured the heart of Marlies Fickel, ’60, who had immigrated from Germany after joining the Church of Jesus Christ. The couple–still admittedly “madly in love”–has spent the last 44 years dancing together. 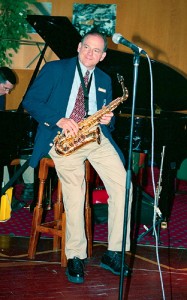 “When we learned BYU was assembling a group for a big-band tour aboard the Queen Elizabeth 2 (QE2), we knew we wanted to come,” Keith explains. “This has been a wonderful experience and was a great way to celebrate our wedding anniversary.”The Carrs danced their way across the Atlantic Ocean during the BYU trip in June that included a week aboard the luxurious QE2 and a week touring England.Sharon Jacobs of Provo, who has traveled with BYU tours before, says she always welcomes the opportunity to dance to big-band music. This time she said she felt a special affinity to the band performers because much of the entertainment was provided by BYU‘s Synthesis orchestra.“Those musicians are a dream,” she says. “I wanted every one of those boys for my grandsons. I was particularly impressed with the comments of those onboard who were not members of the Church. They were impressed with the clean-cut young men and their talent. And Ray Smith is a gifted director.”One couple, Vic and Auliiki Canale of England, said they came for the big-band music and really liked the “young band,” as they called Synthesis. They attended every concert and dance at which the group performed, including an ecumenical Sunday service for which the musicians played traditional hymns as well as a sampling of hymns familiar to members of the Church.For Calvin N. Smith of Illinois, who attended BYU in 1954 and 1955, the cruise fulfilled a lifelong dream to cruise on the QE2. He especially liked the dances and hopes to cruise many times. “This was a lovely trip with really fine people. I’m glad I did it,” he says.LaVon F. Eller, ’53, and his wife, Rae, of Salt Lake City, received a BYU flyer announcing the trip and were especially interested because they had served a Church mission in London.“We didn’t think we could afford it, but our daughter thought otherwise,” says Rae. “Imagine our surprise when she made all the travel arrangements and paid for the voyage.” 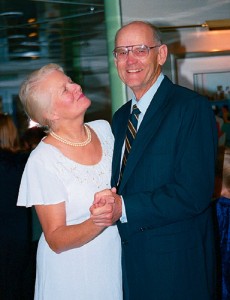 In addition to the dances, the cruise included fine dining, lectures, food demonstrations, movies, swimming, computer classes, games, and opportunities for working out in a fully equipped gym.On land the tour included several days of visiting abbeys, castles, and significant landmarks in rural England before culminating in London with an itinerary that included the musical The Lion King and a visit to the Tower of London.“This group got very close,” says Nancy Carson, of Orem, Utah, who served as a BYU host. “We gave each other lots of farewell songs and hugs. The feeling of love and friendship was strong.”

For Trombonist and singer Alisha Ard, performing is just another form of service.

A Lecture for Young Mormons

The author of Letters to a Young Mormon drew a crowd at his BYU lecture on Mormonism and morality.