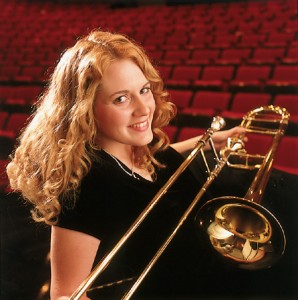 For Trombonist and singer Alisha Ard, performing is just another form of service.

AS a fifth grader, Alisha M. Ard, ’02—the only girl from a family of seven children—considered her options for the school music program and decided to become a drummer. The drums, she remembers, appealed to her mostly because they were not, in her opinion, very ladylike. Ard’s mother, however, had different ideas. “She thought I had a good ear because I could sing,” Ard recalls. “She wanted me to play a melodic instrument.” Reluctantly, Ard reconsidered her options. “I said, ‘No way am I playing the flute or clarinet, because they’re for girls.’ I didn’t want to play the tuba because it was too big, so I picked the next biggest—the trombone.”After a distinguished high school career, in which she was selected to play in Washington’s all-state high-school band, Ard came to BYU. In her usual confident manner, she auditioned for Synthesis—BYU‘s premier jazz band—despite the fact that freshmen are almost never accepted. She was not surprised when she made it. Ard has now played trombone with Synthesis for eight semesters, but that’s not all she does. Professor of music C. Ray Smith, ’75, the band’s director, quickly discovered what Ard’s mother had known all along: “The very first year she was in the band, we had a little number called ‘TV Blues,'” Smith says. “She told me that she could sing it, and so I said, ‘All right. Let’s see what you can do.'” Smith liked what he heard, and since then Ard has sung concert numbers for Synthesis, the Dixieland Jazz Band, and the Vocal Jazz Ensemble. But contrary to the old jazz standard, Ard believes that even if “it ain’t got that swing” it’s still worth playing. “When I came to BYU, I was a jazz musician,” she says, “but the more I’ve gotten to know the orchestras, the more I’ve enjoyed them.” And she has gotten to know nearly all of them. “I’ve been in the marching band, the pep band, the wind symphony, the philharmonic orchestra, the brass choir, the trombone choir, the mainstream combo, the brass quintet . . .” Ard trails off, thinks for a moment, and then says, almost disappointed, “I think that’s all.” Ard’s persistence and success at BYU—she was one of the winners of the concerto competition last year—is spreading to off-campus competitions as well. In the last two years, she’s been a finalist in three international performance competitions sponsored by professional symphonies, and she recently accepted a position with the Orchestra at Temple Square. In 1999 Ard took a break from music to serve a mission to Ukraine, and after returning to BYU she recognized yet another opportunity to use her musical talents. “The whole former Soviet Union is still recovering economically,” she says. “One of the things that hasn’t made it is the arts.” Taking advantage of a university research grant, Ard returned to three cities within her mission and, with the help of a few local pianists, performed a series of free concerts. Her performances in Ukraine so affected her that she decided to add a second major in Russian. “I really love Russia and Ukraine,” she explains, “and I want to support them any way I can.” Though Ard is still uncertain of what the future may bring—she’s considering attending law school, starting her own band, pursuing a singing career, or applying to a graduate program in music—she is certain of one thing: music will always be a part of her life. “I think I feel best about myself when I’m performing,” Ard says. “It’s just like doing service for somebody or giving them a gift—performing gives you that same good feeling.”

Electronic Voices from the Past

Visit BYU speeches to hear classic and new speeches given at BYU devotionals.

Strength From a Stroke

When Dr. Steven Edgley advises his stroke rehabilitation patients, he can speak from experience.