By Charlene Renberg Winters in the Spring 1997 Issue

When BYU assistant theater professor Tim Slover penned a Shakespearean-style comedy featuring William Shakespeare, he hoped he was creating a play that would be “as you like it.”

The judges of the Writer’s Digest 65th annual writing competition have validated that wish by awarding his March Tale the 1996 grand prize from among 12,000 entries. The play also won first place in the playwriting division of the contest.

Among other prizes, the honor gives Slover an expense-paid trip to New York City to meet with editors and agents, and–he hopes–a chance to get March Tale produced.

The comedy, written in classic Shakespearean form, includes triple plots and several groups of characters ranging from the higher to lower classes, from serious to comic subjects, and from older to younger players. During the play these groups and their concerns are interwoven so closely that resolution in one is associated with resolution in another.

Slover’s Elizabethan-era play features Shakespeare, Queen Elizabeth, and various other characters who tromped about England in the 1600s. Loosely based on an actual historic incident, the play begins in March 1603 during the last few days of Queen Elizabeth’s reign. The queen is dying, but trying to deny it, and takes her court to her palace in Richmond to see Shakespeare’s company perform The Merry Wives of Windsor. The action, both on- and off-stage, gives the play its momentum.

BYU theater professor Robert Nelson, who directed the play when it premiered at BYU during the fall of 1995, said that while the topic may be Shakespearean, the flavor of the play is modern.

“This is about Shakespeare the man interacting with his wife, Anne Hathaway,” Nelson said. “The relationship is strained in large measure due to Shakespeare choosing to pursue his career at the expense of his family. And how many of us, in these days of multiple-career families and commuter marriages, can relate to that?”

Nelson said one of the delightful elements of Slover’s work is that it gives one possibility to the question of what Queen Elizabeth and Shakespeare might have had to say to one another if the two historical giants had met late in their lives.

According to Writer’s Digest, the structure and easy access of Slover’s work appealed to stage-play judge James D. Wilson, who said, “Slover has achieved a bridge that authenticates the period and makes it accessible to a public not predisposed to enjoying period drama. It generated liveliness both in character and economy of expression and effect.”

In selecting a Shakespearean style, Slover tapped into his passion for England and the bard. His decision to explore the Hathaway-Shakespeare union in his play occurred during one of Slover’s many pilgrimages to London (where he researches, sees plays, and teaches for BYU’s study abroad program). 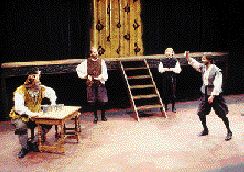 “I had a transcendent experience in England that made the family link work for me,” Slover explains. “My wife and I were at the Trinity Church at Stratford-on-Avon, a cruciform church with a weeping chapel that tilts–like Christ on the cross. Shakespeare is buried beyond the chapel’s nave. As we approached the grave of Anne Hathaway, I had the strangest impression that I should write about Shakespeare and his family.

“While many Shakespearean scholars dismiss the idea of Shakespeare’s marriage by saying he had been trapped into marriage with an older woman and had regarded his wife as a shrew, no one really knows this. I’m looking at it differently. There must have been something between them. She died much later than he and chose to be buried beside him. There was no prestige in that choice; she already had the money. I examined a difficult relationship that, in the play, never works out between Shakespeare and his wife.”

Slover says March Tale has had mixed reviews, which was not unexpected.

“I sent the script to the heads of the Stephen Joseph Theatre in the Round and received a long critique of the play. There were some elements where we disagreed completely. They thought nobody was interested in a play about Shakespeare and that I had ridden the wrong horse. Others disagreed.

“With Writer’s Digest, Shakespeare has risen to the top, and it is gratifying that some people really liked this play and were willing to place it above many other kinds of writing. I wrote March Tale because I loved the subject, and I wanted to write it. I expected some failure–I believe strongly that failure is what people do most of their lives–and I’m glad for those moments of success that are so satisfying.”

A veteran scriptwriter, Slover has written several stage plays on subjects ranging from Mormon history to western art and Butch Cassidy. His dramatization of the 1787 Constitutional Convention, A More Perfect Union, received an Emmy nomination.

His latest script, Joyful Noise, focuses on Handel and his writing of The Messiah. The play was given a staged reading in December and will have another reading at the Tuacahn Festival of the Arts, near St. George, Utah, on March 13. “As I so often seem to do, I’m dealing with how people turn their lives away from failure. Handel was a terrible failure, an utterly despised man, before he wrote his masterwork. I’m finding him fascinating.”

Founded by BYU alumnus Fred Adams, this festival is one of North America's premier Shakespeare festivals.

When “O Romeo, Romeo! Wherefore art thou Romeo?” gets lost in translation.