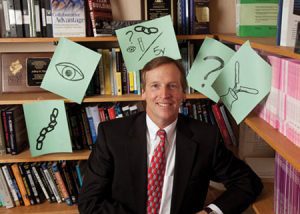 Top innovators, in almost every case, engaged in certain behaviors before having their next big idea, says Jeff Dyer.

Ever wonder how innovators come up with million- or billion-dollar ideas? So did a team of scholars led by BYU’s Jeffrey H. Dyer (BS ’82). Their discovery: the most innovative CEOs spend 50 percent more time practicing five specific skills than do their less-creative counterparts.

These five skills surfaced in interviews with the likes of Amazon’s Jeff Bezos, eBay’s Pierre Omidyar, and Dell’s Michael Dell and are reported in the Harvard Business Review.

“Most executives view creativity and innovation as a ‘black box,’ or something other people are good at, but they don’t know how to do it themselves,” says Dyer, chair of BYU’s Department of Organizational Leadership and Strategy. “We’re opening up the box.”

Dyer and his coauthors, Hal B. Gregersen (MOB ’83) of INSEAD and Clayton M. Christensen (BA ’75) of Harvard Business School, found that top innovators routinely engaged in certain behaviors before coming up with their best insights. The researchers then folded those behaviors into their survey of more than 3,000 execs and 500 individuals who had started innovative companies or invented new products. After analyzing the results to find which activities correlated with innovative ideas, the following five “discovery skills” emerged:

Innovative executives ask a lot more questions than the typical executive does, Dyer says. “Especially questions that challenge the status quo.” For example, they might write 10 questions each day that challenge assumptions in their company or industry, asking, “Why?” “Why not?” and “What if?” to spur creative thinking.

Innovative CEOs watch people, says Dyer, especially potential customers. They observe how customers experience a product or service, and they focus on the things that differ from what they expected.

Innovators experiment by seeking training outside their expertise, taking apart a product or process to see how it works, or living in a different country and culture. “You can’t succeed in living overseas without using these discovery skills,” says coauthor Gregersen.

“Rather than network to gain access to resources or to market [themselves], [innovators] connect with others simply to find and test new ideas,” Dyer says. Innovators attend conferences with people outside their industry. They contact the most creative people they know and ask them what they do to stimulate creative thinking.

Connecting seemingly unrelated questions and ideas is associating, the skill that brings all the others together, Dyer explains. When confronted with a problem, innovators draw from and apply the knowledge they’ve acquired through questioning, observing, experimenting, and networking. The senior executives of the most innovative companies in the study don’t delegate creative work. They make time for innovation skills by enlisting others’ help in executing skills, such as planning and analysis, Dyer says.

It takes a second for the shock to register on everyone’s faces. Reggie is dead.

The Good Samaritan and Eternal Life

A certain man went down from Jerusalem to Jericho, and fell among thieves.