THE Utah Valley Food Bank was 17,000 pounds richer during the 2000 holiday season thanks to the efforts of BYU‘s Student Alumni Network (SAN). SAN beat the University of Utah in the third annual BYU v. U of U food drive competition. 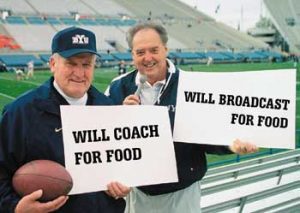 Coach LaVell Edwards and broadcaster Paul James show their support for the third annual BYU v. U of U food drive competition.

The drive, which culminated with the rivals’ fall football game Nov. 25, was the most successful ever, according to BYU coordinator Todd J. Hendricks, ’00, and U of U alumni business relations director John Fackler.“Just like in the football game, the Utes came up a bit short,” Fackler said. “However, Utah fans donated more than $10,000 to the Utah Food Bank, which went a long way in feeding the hungry during the holidays.”“We figure we raised slightly more than a half-pound of food for every BYU student,” Hendricks added. “This was possible because of the assistance of 30 campus groups and the volunteers in the Student Alumni Network.”Hendricks particularly praised the work of the Students for International Development and the Student Leadership Seminar, the support of Alumni Association executive director J. Michael Busenbark, ’72, and the work of Janene Spelts and Janae Spelts, both from Henderson, Nev., who were the BYU student chairs for the food drive. Participating campus groups ranged from wards to the Sailing Club and the Storytelling Club.“A thank-you goes to Coach LaVell Edwards and broadcaster Paul James—both U of U alumni—for letting us use their retirements as a theme for the food drive,” said Fackler.“Actually, almost any Utah school can claim LaVell,” Hendricks said. “He received his doctorate at BYU, his master’s at the U of U, and his bachelor’s at Utah State University.”

Norm R. Nemrow has a passion for teaching.

How your donations to BYU are making a world of difference.