How your donations to BYU are making a world of difference.

Education is important; in an uncertain economy, it is even more vital. Because of donations from alumni like you, thousands of BYU students every year get a chance at a better education.

BYU’s message to you is simple: Thank you.

“I am grateful for what you do to assist our students,” BYU president Cecil O. Samuelson says to donors. “You are truly helping to advance the mission and destiny of BYU.”

Donations are vital to supporting the work of the university. President Samuelson has made student scholarships this year’s funding priority. Scholarships allow BYU to attract especially accomplished young men and women, and they help qualified students who otherwise might not be able to afford tuition.

Another priority has been the new BYU Broadcasting building, which is nearing completion. Built with donated funds, it will be home to BYUTV and will help the station share the message and spirit of BYU with the world. BYU is now seeking to raise money to fund new and original BYUTV programming.

Giving benefits both those who give and those who receive. On these pages read about the givers, learn how your donated funds are blessing the receivers, and celebrate the good you do—for students, the university, and the world.

Visit giving.byu.edu to learn about other priorities or to make a donation.

Playing by Ear and by Heart 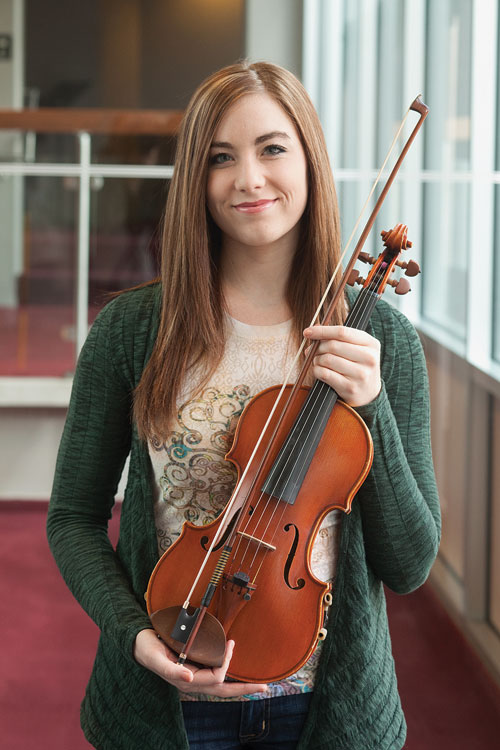 As a 5-year-old Josie I. Nielson (’13) fell in love with the violin, unaware that she had a disorder that would threaten her ability to play. She wore glasses, but it wasn’t until adolescence that her rapidly deteriorating eyesight yielded a distressing diagnosis: a form of macular dystrophy that would ultimately rob her of her sight.

“That was hard for a 13-year-old to be told,” says Nielson, now a BYU violin performance major. “One of my first concerns was how I would learn music when I’m blind.” But she says trials can be gifts from God: “I have discovered that as my vision worsens, my other senses become sharper, especially my hearing. My memory is also quickened, and I’m able to memorize more music in a shorter amount of time. .. . As I put my faith in the Lord, he blesses me to accomplish the things I set forth to do.”

To learn music, Nielson, who is now legally blind, listens carefully to recordings. “A particular time when I couldn’t detect my part was when the BYU Philharmonic Orchestra played Mahler’s Symphony no. 5. My wonderful professor, Monte Belknap, recorded my violin part—about 40 pages—slower so I could memorize the music for the performance.”

Academic and music scholarships have made it possible for Nielson to attend BYU despite family finances strained by her father’s multiple open-heart surgeries. Scholarships have also helped her buy assistive technology so she can succeed in school. “Scholarships have been a blessing for me and my family. I want to thank those whose generosity has blessed my life in ways I can’t begin to describe.”

Nielson, from Eagle, Idaho, wants to earn a master’s degree in violin performance and develop the methodology and tools that will help her teach music to others who are visually impaired. “Music is my passion,” she says. “It is my hope to inspire and encourage others to find their own passions in life.” 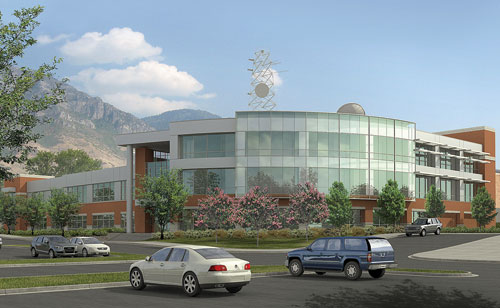 A lot has changed since BYU Television went on the air in January 2000. When the channel launched, it was available to fewer than a million homes on an obscure tier of the DISH Satellite Network. Today, BYUTV is available nationally—and even globally—in more than 50 million homes on the DISH Network, DIRECTV, and more than 500 cable systems. BYUTV’s sister station, BYU Television International, is available in millions of homes in Latin America and broadcasts in English, Spanish, and Portuguese. Both channels also stream live on the Internet and reach viewers in 188 countries.

“As we celebrate the 10th anniversary of the channel, BYUTV remains true to its original mission of revealing the campus of BYU as well as providing content that will strengthen members of the Church,” says Derek A. Marquis (BA ’88), managing director of BYU Broadcasting. Additionally, BYUTV is making a concerted effort to provide content that will attract an audience beyond alumni and members of the Church.

In late 2010, BYU Television will move into its new home just east of the Marriott Center—a donor-funded, state-of-the-art, high-definition production facility. “But it isn’t about the bricks and mortar,” says Marquis. “It’s about what will be broadcast from the building.”

42,674 graduates (16.4 percent) donated to BYU in 2009; this is one of the nation’s highest marks for alumni giving to large universities.

“Our experience [at BYU] and our associations at the university have helped us as parents, in our Church callings, and in [my husband’s] professional duties. . . . The only way we can adequately thank the Lord and all those who have helped us is to give back so that others may have wonderful experiences like we’ve had.”

“Without people like you, my education would not be possible. . . . As Henry David Thoreau said, ‘If one advances confidently in the direction of his dreams, and endeavors to live the life which he has imagined, he will meet with a success unexpected.’ Thank you for helping me advance in the right direction.”

“Before my dad died he asked my brothers and me to do three things: take care of our mother, serve missions, and go to college. We’ve tried our best to remember our first promise. We each served a mission; I went to St. Petersburg, Russia. And . . . once I considered law school, I knew it was for me. I am honored by [the] scholarship [I have received]. Thank you for helping me keep my promise.”

Dozens of international students have come to BYU, where they learn to build both faith and business.

Spencer Nugent won the most prestigious award given to industrial design students.

A pay-it-forward grant has caught on at BYU—and changed Ginny Naylor’s life.