WHILE attending BYU‘s Marriott School of Management in the late 1970s, Norm R. Nemrow, ’78, taught a basic accounting course. To his delight, the master’s degree candidate discovered he had a passion for teaching.“I realized that if I had any real talent, it was probably in teaching,” he says. “I loved the process of trying to explain and communicate concepts.” 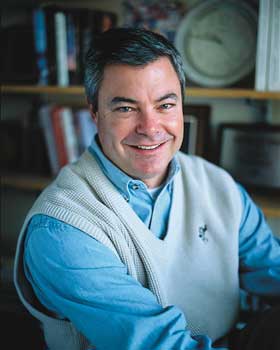 Nemrow began his career at the accounting firm Arthur Andersen in Orange County, Calif., but kept his hand in teaching with a part-time position at Cal State Fullerton and then a full-time professorship in Pepperdine University’s executive MBA program. That led to other opportunities.“By nature I am not a risk taker, but I found an opportunity to try something entrepreneurial,” he explains. “When I accepted the position with Pepperdine, which required only two nights a week, I came across a real estate venture that I could pursue during the day.”In 1982 Nemrow helped form a company; he and his partners bought, managed, and sold more than 11,000 apartment units before selling their business in 1985. Having achieved some financial independence, he struggled to find his next pursuit. “I played some golf, taught early morning seminary, took art classes, built a home, and tried some other projects but was basically unfulfilled.”So in 1991 Nemrow and his wife, Cindy, moved their family to Provo, and he began to “pester” K. Fred Skousen (then dean of the Marriott School) and W. Steve Albrecht (then director of the School of Accountancy) for a chance to teach.“They didn’t seem too interested in me until I offered to do it as a volunteer,” Nemrow says with a smile. “You know how budget conscious accountants can be.” He now teaches Accounting Principles, the same course he taught as a graduate student, to about 1,200 students each semester. A popular professor, he has twice been voted Overall Best Teacher by the Student Alumni Association. On the BYU student-produced Web site StudentReviews.com, one student calls Nemrow “the best teacher I had at BYU by far. Going to his class was a treat, and two years later I remember everything.”Hoping to make accounting even more interesting for students, Nemrow spent most of 1999 creating a hybrid course that involves seven live lectures, optional review sessions, and 50 hours of CD material for online learning.“My explanations through the CDs are clearer because I can use more graphics,” Nemrow says. “Most students love the CDs because they allow them to learn the material at their own convenience and pace. They can pause the presentation to take better notes and watch it as many times as they need to understand difficult concepts. The homework problems are all on the CDs with immediate solution feedback. My survey of students indicates that more than 80 percent prefer this CD/online course and learn better from it than from a traditional textbook/lecture format.”Nemrow sees the online course as a way to extend BYU‘s ability to teach people worldwide. “I believe it is our sacred responsibility at BYU to use our resources efficiently and effectively. As technology improves, I predict that students elsewhere will be able to sign up for many courses at BYU.”Nemrow’s love for his work is apparent. “BYU gave much to me, and I am happy to give back. I believe BYU plays an important role in building the kingdom of God on the earth. It is a wonderful thing to participate and contribute to that mission.”

Inspiring stories from athletes and others seeking spiritual glory.

Alumni use their BYU educations to serve their communities, neighbors, and families.