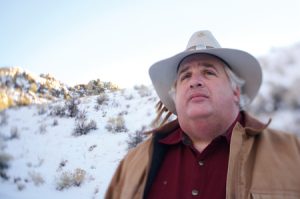 Compelled by stories of handcart pioneers’ faith and courage, Scott Lorimer and his stake completed over 4,000 temple ordinances for members of the Willie and Martin companies.

Standing on Rocky Ridge with R. Scott Lorimer (BS ’75), it becomes clear that, to Lorimer, this is holy ground. As he walks the top of the ridge, scanning the ground for items like the pioneer-era square-headed nails he has found in the past, he tells stories of people who traversed this trail. Lorimer spouts names and dates from the history of the Willie and Martin handcart companies from memory, as though he had been there himself in the early snows of 1856.

Lorimer’s first contact with the stories of the Willie and Martin people came as a young boy, when he visited Martin’s Cove in central Wyoming, where the ill-fated Martin company became stranded. He remembers being touched by the spirit he felt there. A descendant of handcart pioneers, Lorimer was interested in the history of the Mormon migration, but it wasn’t until he became president of the Riverton Wyoming Stake that the stories of the handcart companies really stirred his soul.

For some time Lorimer had felt that his stake should be engaged in a project related to the handcart pioneers, but he was unsure what it was they should do. In 1991, Lorimer discovered that the temple work for members of the Willie and Martin handcart companies was incomplete; temple ordinances had not been done for a staggering 83 percent of those who died on the trail and 52 percent of those who lived.

So Lorimer gave each member of the stake 12 years old and older a name and the same assignment: find out if the person’s temple ordinances have been done, and if they haven’t, make sure they get done.

The whole experience is now known as the Second Rescue of the Willie and Martin Handcart Companies. In just over a year, more than 4,000 ordinances were performed on behalf of the members of the two companies and their rescuers. Lorimer says stake members were too excited about the project to be bothered by the six-hour drive each way to the Ogden Utah Temple.

In addition, members of the stake spent more than 8,000 volunteer hours constructing stone and bronze monuments at Rocky Ridge, Martin’s Cove, and the Willie company rescue site. They later built the Veil Crossing bridge over the Sweetwater River, miles of trails at Martin’s Cove, and a visitors’ center on the historic Sun Ranch.

Lorimer calls it a great, busy time for the stake. “Everybody got the message. We were doing things because of the spirit of Elijah,” he says.

Sinking in the Night

Consider how BYU might be a temple of learning.