The Long View of Leaders

Great leaders search the horizon, not for problems to solve but for the best path toward noble goals.

The book of Proverbs contains a short, powerful, and oft-repeated thought: “Where there is no vision, the people perish” (Prov. 29:18). Great leaders have a vision that guides their decisions.

Let me explain by distinguishing two possible approaches to leadership. The first approach focuses on solving problems. The problem-solving leader identifies the most important problems at any given time. He or she seeks to understand them and to address them. As leaders discover, there is no shortage of problems that need to be solved. As soon as one is addressed, another requires our attention.

Problem-solving leaders often develop great skill in diagnosing a problem, identifying a viable range of options for addressing it, and choosing from among those options the path that is likely to have the best ratio of advantages to disadvantages. At its essence, this problem-solving approach is reactive. It seeks to respond quickly and effectively to the circumstances at the time. 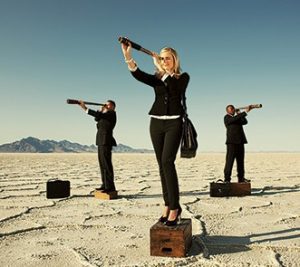 A second approach to leading an organization begins by the leader establishing a limited number of overarching goals and objectives. These goals serve as the prism through which every problem or challenge is viewed. What drives the decision-making process is the question: In deciding this issue, what path will take us furthest in the direction of achieving our overarching goal? Such decisions constitute a strategy in which the focus of attention is not on solving problems but on achieving a major goal.

The distinction is a subtle but important one. Goal-oriented leadership causes leaders to view the decisions they make as part of a tapestry they are determinedly weaving. This approach is decidedly proactive rather than reactive. It is not, however, oblivious to current circumstances. It recognizes that problems are usually best addressed early and in a systematic and informed way. The difference is that great leaders are searching the horizon, not for problems that need solutions but for the surest and most efficient path to the overarching goals they have established.

It is a style of leadership that is both patient and determined. The view it seeks is long-term and is animated by specific goals. The temptation is strong, especially for talented and ambitious people, to try to do more and more, to redouble one’s efforts in the face of a challenge, to try to work harder, longer, and smarter. But it is a condition of life that there are more useful activities than there are hours in the day or available resources. Thus, a primary task of leadership consists in determining the hierarchy of an organization’s interests and how best to advance them. Great leaders have an ability to focus not merely their attention but also the attention of those they lead on a limited number of goals and objectives. They are not diverted by the seemingly urgent.

That advice is easy to articulate but difficult to follow. Thomas Jefferson, one of our most intellectually brilliant presidents, had a wide range of interests. At the same time, Jefferson recognized that great leaders do not allow themselves the luxury of dissipating their time, energy, or capital. In his view, great organizations focus their attention on large questions. In a letter to Edward Carrington in 1787, he wrote,
“I have ever viewed the executive details as the greatest cause of evil to us, because they in fact place us as if we had no federal head, by diverting the attention of that head from great to small objects.”

Great leaders concentrate on the important and eschew the less important.

Roger Porter, the IBM Professor of Business and Government at Harvard University, was an economic advisor to three U.S. presidents. This essay is adapted from a Wheatley Institution forum address given Feb. 15, 2012. Watch the address at more.byu.edu/porter.

Anyone who says “it can’t be done” probably hasn’t worked with J. Craig McIlroy (BA ’78).

Managing Without a Leader