Anyone who says “it can’t be done” probably hasn’t worked with J. Craig McIlroy (BA ’78), the new president of the BYU Alumni Association. The phrase just isn’t part of the Littleton, Colo., resident’s vocabulary.

For example, when he thought of having the Mormon Tabernacle Choir perform at the Pepsi Center in Denver for the 2005 holidays, McIlroy encountered a chorus of naysayers. Undaunted, he soon found a sponsor in the Denver-based National Sports Center for the Disabled and went on to set up the performance. The November show kicked off the holiday season for a full house of more than 15,000. 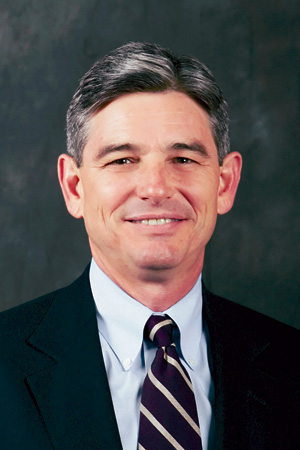 “That’s typical Craig,” says his wife, Bertha Hiskey McIlroy (BS ’76). “Craig has been known to say, ‘There is always opposition, especially when a meaningful and worthwhile project is in play.’ Keeping that in mind, I know he’ll do everything he can to make the right things happen for the Alumni Association.”

It was that “can do” attitude that led McIlroy and his wife to accept an invitation in 1995 to serve as chairs for a BYU alumni chapter in Denver, an assignment they held for seven years, until Craig became part of the BYU Alumni Board.

“We were able to bring all the constituency groups—the Denver Alumni Chapter Law Society, Cougar Club, and Management Society—under one umbrella and coordinate a master calendar each year,” he explains. “We then assisted each other in our various projects, whether it was a management breakfast, a law lecture, a Young Ambassadors concert, or a football tailgate party. We as a group shifted our efforts to support each event during the year, regardless of who had the project lead. I believe this is the most logical way to ensure success of alumni efforts in the field.”

The Gordon B. Hinckley Alumni and Visitors Center, currently under construction on campus, will be completed during McIlroy’s tenure. “This project has been talked about for a very long time,” he says. “It has been very dear to many, many people who have maintained—accurately—that we need a new facility. We’ve been working diligently to make this building a reality, and it comes at an ideal time for the association. Even before the building was announced, we were evaluating and restructuring the Alumni Association with a vision of greatness. We were adopting the philosophy of going from good to great, and the new building just gives us a great push of momentum in our efforts.”

McIlroy says he is personally gratified that the building will house the visitors center as well. In 1980 he was asked to start BYU’s Hosting Services. “It is very encouraging to know this important guest-relations program will now be housed in this new world-class facility where we can properly greet and serve visitors.”

While taking formal pictures of alumni across America, photographer Bradley Slade captured a portrait of America.

A Boundless Field of Truth

BYU Magazine presents a sampling of the Brigham Young's teachings on education.

For centuries, people have wondered how to picture a mysterious creature from Japanese folklore—until now.