Managing Without a Leader

A BYU professor seeks to flatten organizational charts, inviting the involvement and insights of all employees.

The devil’s advocate was at the 6 p.m. meeting, wearing typical business attire. Of the four colleagues present (and the one on the speakerphone), the advocate was well-camouflaged in his white shirt and tie until he bluntly revealed himself. “I’ll be the devil’s advocate,” he stated. No startled reactions followed the disclosure, but a smile or two emerged from those sitting around the light cherry table.

The devil’s advocate had been expected.

That’s not all that was out of the ordinary at the Desert Rose Vitality Corporation meeting. Along with the usual corporate lingo, terms like peer based,openness, and joy bounced off the walls. And in the end, it was hard to say who was in charge.

The corporation was implementing Jeffrey S. Nielsen’s (’80) leaderless approach in their deliberations—what he calls peer deliberations, in which all participants are equally involved and assume rotating roles, like devil’s advocate or facilitator.

Nielsen’s shift from leadership to leaderless may sound like a dive into anarchy, but this visiting lecturer in philosophy at BYU, who recently published The Myth of Leadership: Creating Leaderless Organizations, argues that such a shift is essential if organizations are to be successful in every sense. 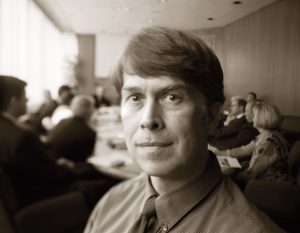 As a business consultant and an author, Jeff Nielsen proposes giving the traditional business model a radical shake up – adding chairs to the decision-making table and removing the leader. Photo Illustration by Bradley Slade.

As a part-time business consultant, Nielsen had seen enough of rank-based leadership to want to search for a different approach. “In trying to make organizations more successful and effective, one of the chief obstacles was the mentality of the leaders and the practice of leadership at the top,” Nielsen says. That mentality, which he describes as a feeling of superiority, interrupts the flow of genuine communication. “I could see that those at the front line could identify the cause and solution to a problem,” says Nielsen, “but they had no avenue to express that to their superiors, or when they did, their leaders didn’t take it seriously.”

To implement a peer-based equality, where all workers are informed and help make decisions, Nielsen presents a model for managing that includes peer councils and rotational leadership. “If you just throw people together and say, ‘We’re all peers—let’s make it work,’ it’s disastrous,” says Nielsen. “There’s a distinct process that has to be implemented. You begin by setting up four to five key roles—the facilitator, the devil’s advocate—you let it be known that these are important perspectives to have, and you guide the conversation and make sure everybody participates.”

In his efforts to make organizations more effective, Nielsen has seen success, especially in newer companies like Desert Rose Vitality Corporation, a health-care company for seniors.

Roger L. Hiatt began Desert Rose in 2000, but it wasn’t until 2005 that he enlisted Nielsen’s help. Hiatt, who had read about The Myth of Leadership in local papers, found that his own ideas on leadership matched Nielsen’s, though at first he wasn’t entirely convinced. “I had very strong misgivings because I had been steeped in a command-and-control organization,” says Hiatt, who was concerned that such an approach would create a stagnant organization. But his doubts were quickly appeased once Nielsen began working with the corporation. “The minute we started engaging in the peer-based approach,” says Hiatt, “any hesitancy I had melted away.”

Many organizations have taken similar approaches without reading Nielsen’s book. New York City’s renowned Orpheus Chamber Orchestra practices and performs without a conductor, but they rotate leadership roles among the members. For each musical work the members select a different concertmaster, who guides the rehearsals and performances. The members also choose different principal players for each piece, and they form a “core team” that decides the initial interpretation of the work. The rest of the members add their input to refine the piece. “At Orpheus,” Nielsen writes in his book, “each associate’s priority is to use his or her talents to contribute to making the best possible musical product—leading is just another skill set associates develop, not a primary position they hold” (p. 154). 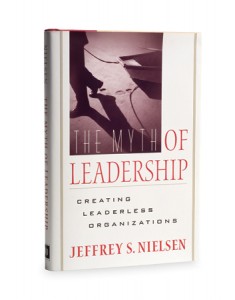 Even with Desert Rose and Orpheus finding success in peer-based methods, some companies find it difficult to make the transition—or they simply disagree with Nielsen’s theory. “At first,” Nielsen says, “I couldn’t get anyone in any current consulting company to listen to me. How do you go in to a CEO and say, ‘You’re not as important as you think you are’?”

Nielsen’s first attempt to help an organization become peer based was what he calls a disaster. “The CEO wanted to implement the council system,” says Nielsen, “but unfortunately, he wasn’t willing to open the councils to everyone within the organization.” Only managers and vice presidents were invited to participate. “It became the same old thing,” Nielsen says.

And then there are voices of dissent and caution. J. Tenneson Woolf (BS ’88), the managing director of BYU’s William G. Dyer Institute for Leading Organizational Change, has observed a reaction to the peer-based theory: “Most people say, ‘I really like your ideas,’ but then they hesitate.” Their hesitancy, Woolf suggests, comes from the notion of leader as hero, an idea that he says has become ingrained in all of us over time. “Rank-based leadership is something we learn along the way, and it works well in many situations,” he says. “But there are a whole host of issues and problems that rank-based leadership cannot fully address, and in order to create solutions over a long period of time, you need to invite more peers and their intelligence to solving problems.”

Upon first encounter with Nielsen’s theory, large corporations might find his ideas hard to swallow. After all, how do you open up a council to 800 people without inviting chaos? Nielsen prefers to create several smaller peer councils rather than one oversized crowd, saying that people are likely to get dwarfed in giant organizations. “You create on the human scale,” he says. “When you design your organization, you have to bring people together in workable teams.”

“How do you go in to a CEO and say, ‘You’re not as important as you think you are’?” –Jeff Nielsen

Curtis Porritt, president and CEO of 10x Marketing, has worked and traveled with Nielsen and believes many aspects of the peer-based theory are worth pursuing. However, he says Nielsen’s idea of equal teams without leaders would be difficult to apply in the real world of business. “I think somebody needs to be in charge and direct the team,” he says. “It’s tough to find a team of people who work equally hard. If you’re going to reward everyone the same, you’re going to have trouble down the road.”

The deepest difficulty in applying the peer-based model is, perhaps, the inner change Nielsen calls for. His formula for success isn’t simply a surface treatment. He asks for a complete paradigm makeover, in which employees come to see their work and roles afresh. “I think he shows courage in challenging our habits,” says Woolf. “It takes a lot of perseverance to challenge deep habits.”

Even Desert Rose has found the shift to be difficult. “It will require a change of heart,” Hiatt says. “It is a bumpy process because we’re changing our paradigms.” But Hiatt wholeheartedly supports Nielsen’s efforts. “We have seen more results here than we have seen in the past five years.”

Nielsen’s theory isn’t aimed solely at financial success within companies. He is striving to enrich individuals’ lives within organizations. “You go to work for 8 hours a day, and you have to do what you’re told. What kind of life is that?” Nielsen says. “Or you’re the leader, and you’re responsible for an entire organization. It’s impossible for one person to bear that burden. We believe in free markets, yet our businesses are run like command-and-control economies. Peer-based thinking is realizing that freedom belongs at every level of being in our lives.”