High-achieving families can find balance in the doctrine of grace.

For some youth, growing up in the seemingly perfect family can be stressful—especially when they struggle to live up to high achievement standards.

Thomas G. (BA ’83) and Kathleen “Katy” Clark Taylor (’83) both grew up in high-achieving, high-expectation families, and when they married in 1980, they intended to carry on those values in their new family. Tom, who grew up in Palo Alto, Calif., says he had absorbed the prevailing local culture’s esteem for high income, good looks, and an image of having it all together.

But just a few years into their marriage, a daunting challenge intruded on that idealism and changed their family forever—Katy suffered an aneurysm. She survived, but for years she had much lower energy and decreased physical abilities. And so the couple had to radically adjust their expectations for themselves and their children.

“We began then to shed the façade of perfectionism,” says Tom. “Our inability to execute against our personal expectations caused us to rethink what was really important to us.”

While the Taylor family still pursued worthwhile goals for themselves and their children—such as seminary graduation, scholastic achievements, Scouting, and sports—they shifted their focus from achievement to happiness. It became their purpose to fulfill the scripture that “men are, that they might have joy” (2 Ne. 2:25). Tom recalls that he and Katy “moved away from a desire to look like we were perfect and used Lehi’s words to inform and confirm our choices. Instilling solid happiness in our lives and the lives of our children became far more important than specific achievements.”

Without knowing it, the Taylors had shifted to a more psychologically healthy and adaptive family culture, according to the research of BYU assistant professor of counseling psychology G. E. Kawika Allen and Fuller Theological Seminary psychology professor Kenneth T. Wang, who study perfectionism in individuals and families.

Their research has shown that high family achievement standards can lead to positive outcomes, such as learning, growth, and greater religious commitment. However, they have also seen that children who struggle to achieve family standards or don’t buy into them often worry they will compromise the family image, which can lead to discouragement, anxiety, and depression. “In some children this creates shame early on—the feeling that they’re defective and can never be good enough,” says Allen.

As with the Taylors, Allen says it’s possible for families to shift their attitudes on perfectionism and create an environment where children feel accepted and loved, whatever their level of conformity to family standards. 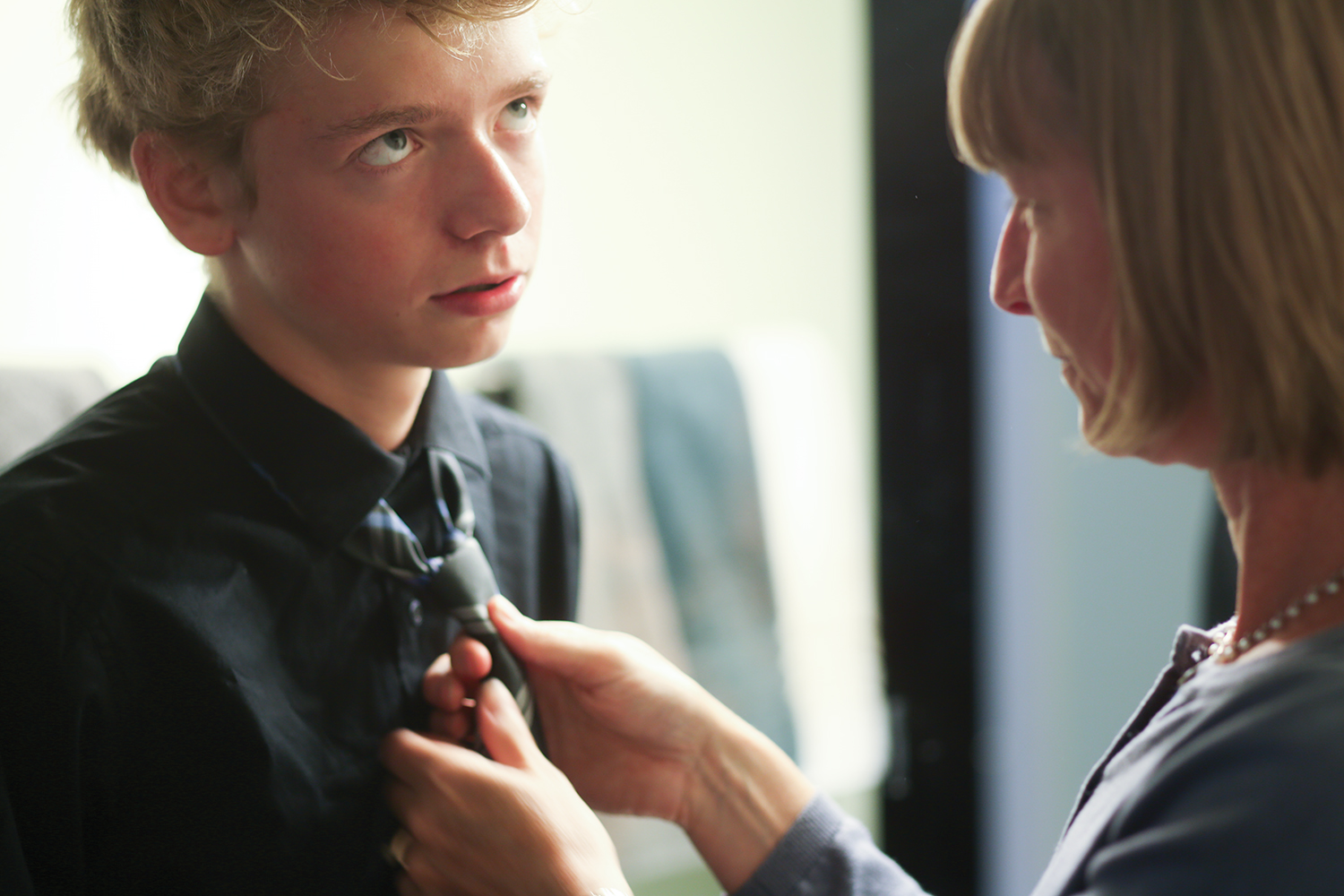 When children struggle to live up to their family’s lofty standards, parents can follow God’s loving and compassionate example.

In a recent article in Psychology of Religion and Spirituality, Allen and Wang found that 77 percent of the young single adult Latter-day Saints they surveyed could be classified as perfectionists, which they defined as having high achievement standards. And for most of these high achievers, the trait was a positive, associated with low levels of depression and high life satisfaction. These were the “adaptive perfectionists.” But the researchers found that nearly 40 percent of those with high achievement standards reported being anxious, depressed, and less satisfied with life. These they classified as “maladaptive perfectionists.”

Allen has come to recognize signs of maladaptive perfectionism in some Latter-day Saint family cultures. Typically, he says, such families have rigid achievement expectations for their children, where a message is subtly conveyed that children who don’t meet the high family standard are somehow lesser or not a full member of the family. In one family he remembers, both parents were involved in Scouting and expected their sons to become Eagle Scouts. “That was one of the things that made them feel like their children were valuable and worth something. One of the boys decided he wasn’t interested, and he got the message that he wasn’t living up to the family ethic.”

In maladaptive perfectionist families, says Allen, parents might say things like, “‘Your brothers have all earned these awards. If you don’t, we will be so disappointed in you.’ Even if parents express their disappointment in a compassionate way, the message is received: ‘You don’t measure up to our family image, and it’s embarrassing.’”

The “if you don’t” consequences are key to the problem, says Allen. Unless parents communicate that it’s okay to fall short of the family standard and make mistakes, they could be setting up their children for emotional and spiritual problems.

In another study, published in the journal Mental Health, Religion, & Culture, Allen and Wang found that the religiosity of maladaptive perfectionist families tends to be based in fear instead of faith. Allen describes the mind-set as spiritual legalism: “Legalism is ‘I need to work for God’s approval by my own flesh, and I will not get His approval or acceptance until I work as hard as I can.’” When individuals with this mind-set make mistakes or otherwise fall short of expectations, they don’t just feel that they’ve done something bad, they see it as evidence that they are bad. This sense of shame, or false feelings of unworthiness, says Allen, can “color everything and consume [one’s] entire religious identity.”

Love Always and No Matter What

Allen recommends several strategies for parents who recognize that their family culture is slipping into maladaptive perfectionism.

Parents can start by shifting more attention to internal attributes and values—such as being kind or hard working or faithful. Such attributes are harder to measure than external achievements, but they are more universal and attaining them can yield greater peace and joy. Tom Taylor says that he and Katy have found that “humble happiness based on who we are and how we work with and for others is achievable and sustainable.”

A second strategy is to choose to love children unconditionally—whether those children meet high family standards or not. While parents may set an expectation that boys in their family should achieve the rank of Eagle Scout, they can also build into their family culture both acceptance and validation for those who struggle with or decide they are not interested in the goal. “For a child who goes this direction, you have to come back with more love—‘We love you always and no matter what,’” says Allen. “You can still express disappointed feelings, but double up on love and acceptance.”

Third, Allen says parents can also practice being understanding about their children’s shortcomings and mistakes. They can start early on by responding in a matter-of-fact and loving way about childish mishaps like spilled milk or potty-training accidents. “You say things like, ‘It happens. It’s okay. Let’s clean up together,’” he says. “This teaches them about grace and mercy.”

Cultivating an Understanding of Grace

As parents show compassion about their children’s struggles to live up to lofty standards, they demonstrate the love and patience that Heavenly Parents exhibit toward all Their imperfect children. “Parents are imperfect at giving love freely and without condition,” says Allen, “but God gives his grace and love perfectly.”

Allen says an understanding of that grace can help families balance high achievement standards with human imperfection. “When we understand the Atonement, we can be okay with mistakes,” he says. “We can pick ourselves back up and move forward. We can ride on this grace—this godly assistance and divine help.”

Decades since their family’s change in focus from external achievement to internal joy, the Taylors can look back on the fruits of the family culture they developed. With their three children now grown, Tom describes them all as—imperfectly—happy.

Tom notes that their family motto has been, “‘Be pretty if you are, be witty if you can, but be cheerful if it kills you.’ I had it inscribed on the outside of our home. I don’t know if happiness is a trait that occurs naturally or if the motto is a guiding principle that helps direct us, but I would say that both as a family and individually we are a happy crew.”

Mothers share how they apply at home what they learned at BYU.

Families That Grieve Together . . .

Given time and space, grieving families can strengthen bonds.