The Buzz on Land Mines

A BYU alum has made friends with honeybees in an effort to make the world safer. 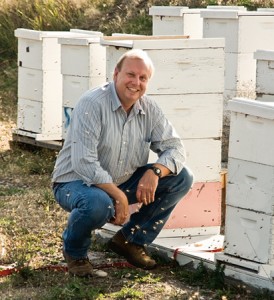 Colin Henderson and his University of Montana colleagues have turned pests into partners, training bees to locate buried land mines.

While bees have been valued since earliest history for the honey and wax they produce and the crops they pollinate, scientists are discovering they possess remarkable abilities that can be used to find land mines, drugs, and even decomposing bodies.

“Bees have an acute sense of smell and can be trained to identify and search for specific odors,” says BYU alumnus Colin B. Henderson (BS ’76), part of a scientific team at the University of Montana whose nationally recognized research centers on bees. The team uses traditional Pavlovian methods to train the insects, associating a food reward—sugar syrup—with a chemical of interest to their research.

In this case, that chemical is TNT, the explosive used in land mines. Working with the U.S. Department of Defense, the team has demonstrated how trained honeybees can serve as a distinctive biological detector to zero in on buried land mines—a problem that endangers populations around the world.

Following vapor plumes to the target odor, bees are able to detect even extremely weak scents from land mines. In one of the research team’s tests, the trained bees found 98 percent of the buried test mines. “The one we missed was sealed so tightly, it didn’t produce a scent and was undetectable by any method,” Henderson explains.

“During one of our tests, the bees kept searching an area we were told was free of land mines, which we feared was a problem in our testing,” says Henderson. “But the bees were right. There was explosive contamination we didn’t know about.”

While training bees, Henderson and his colleagues have had to become engineers as well as biologists. “We have had to invent automated feeding and training devices using electronics and robotics,” he says. “I also worked with colleagues on specialized lasers for mapping the locations of foraging bees.”

Among Henderson’s goals is land reclamation. “There is a huge human and social cost to land mines. If we can find and map where the land mines are, we will do much to return affected land to civilians. A lot of the terror of guerilla warfare is not aimed at competing armies but at local residents who won’t use a field they believe may contain a land mine. This denies essential agriculture to the civilian population.”

Henderson says if land can be verified as safe, it can again be used for food production.

“With bees, we can map and identify at least 10 times more efficiently than we can with a dog team. It is also less hazardous. Most teams handle dogs using a 20-foot leash, and if a dog or the handler makes a mistake, the kill radius is a lot larger than 20 feet. We can survey in one day what takes more than a week with dogs—and humans stand 300 yards away.”

In addition, Henderson, who was re-cently named his university’s most inspirational teacher by graduating seniors, has been involved in research to improve honeybee pollination in crops that repulse them, such as onions. He is also investigating what agents may be contributing to Colony Collapse Disorder, a phenomenon in which worker bees from honeybee colonies abruptly disappear.

“When I studied zoology and wildlife and range management at BYU, I knew my career would involve animals,” Henderson says. “I never suspected it would eventually be insects. It has been rewarding, though, because they are so complex. They learn and adapt well, but we must be careful in our work, because they are smart enough to recognize the people who feed them as well as their vehicles and will chase whoever is bringing the food. They are a fascinating social insect, and I have developed a real affection for them.”

A Journey Through Art and Song

Larry Nielson has shared his gifts for art and music throughout his life.

The Buzz on Land Mines

A BYU alum has made friends with honeybees in an effort to make the world safer.