A Journey Through Art and Song

Although Larry G. Nielson (BS ’62) came to BYU on an art scholarship, he knew he could also sing; so he auditioned to be in the Program Bureau with its celebrated director, Janie Thompson (BA’43). It was the beginning of what he calls a serendipitous journey through life. 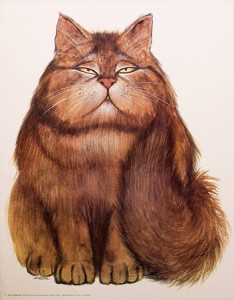 Larry Nielson’s Fat Cat poster and other comical illustrations have brought smiles to viewers in the United States and beyond.

“Being a part of Janie’s team was love at first sight,” says the Ephraim, Utah, cowboy. He joined a group of entertainers who traveled the world representing BYU under the auspices of the Department of Defense. His visual and vocal artistic abilities earned him a best-all-around talent award at BYU and are skills he has used throughout a diverse career.

“When I went to BYU, it was small enough, it felt like a family community,” he says. “I really hated leaving something so beautiful, but I’ve had great experiences elsewhere.”

After serving a mission in Samoa and graduating from BYU, Nielson moved to Hawaii to work on a master’s degree in Polynesian design while he taught art classes at the Church College of Hawaii. He took a permanent detour from formal education, however, when he became a key member of the team that designed the Polynesian Cultural Center. He was the center’s first art director and production manager.

He was there seven years and thought he might remain indefinitely, but when he sang “All the Things You Are” at a wedding in Los Angeles, a member of the congregation approached him about a job singing on the road.

“I had a perfect job, but this was a great opportunity,” he says. “Within nine days I was rehearsing for shows that would take me throughout the United States as a backup singer for singer/comic Danny Kaye.” He also performed on the Carol Burnett and Glen Campbell shows and was a studio singer.

After Kaye died, Nielson combined his love of art and music by working for the Pacific Far East cruise lines—teaching art classes by day and singing with the band at night. His wanderlust got the better of him, however, and he traveled to Samoa to join in the restoration of the Robert Lewis Stevenson home. He continued to do art from his California studio, and his often comical illustrations of animals became popular.

About a decade ago, though, this small-town boy from Ephraim started longing for home. Once there, he found another expression of his art by painting pieces of barn wood. 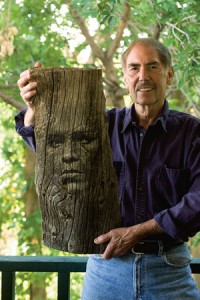 Larry Nielson has shared his gifts for art and music throughout his life.

“As I look at a piece, I see its configurations and directions of motion,” he says. “There is an energy in wood. It’s organic and was alive. When I start painting, the wood tells me what to do. I can see images there.”

He calls his art the Spirit of the Wood, and selections have hung in galleries in Utah, California, Hawaii, Wyoming, and New Mexico. Most of the scenes reflect animals, cowboys, and Native Americans, but one piece depicts soldiers raising the flag on Iwo Jima.

“I decided to get it printed on museum-quality paper and obtain signatures of soldiers who had been at Iwo Jima,” Nielson says. “I visited veterans hospitals and attended reunions. I had them sign their names with rank and serial number. The last person we got was Senator Mark Hatfield. He spent hours reading the names to see who he recognized. It was so humbling to me to realize the depth of the sacrifices involved in that bloody battle.” The original of the work was recently presented to President George W. Bush.

In some ways Nielson has come full circle. He has reconnected with Janie Thompson. She has gathered singers who have returned to Utah to entertain at Christmas shows and reunions, in care centers, and for community organizations. “Janie calls us the ‘old folks,’ and she’s right, but we all have the enthusiasm we had when we were kids at BYU,” says Nielson.

A Life of Learning and Teaching

In her 103 years, BYU alum Lorna Alder has witnessed the importance of obtaining an education.

If you have the midnight munchies, look no further than Five Sushi Brothers and Chip Cookies.