A Life of Learning and Teaching 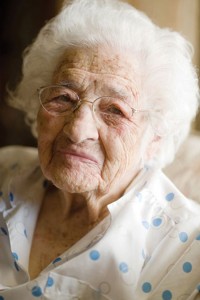 In her 103 years, Lorna Alder has witnessed the importance of obtaining an education.

As a child growing up in the Mormon colonies in Mexico, Lorna C. Alder (BS ’35) remembers being poor, so the state of the economy didn’t make much difference to her when she attended BYU during the Great Depression. “Poor is poor,” she shrugs.

What did matter to Alder, however, was getting a university education. “An educated person has a different view of life and a different way of communicating and associating with people,” she says. She received associate and bachelor’s degrees in elementary education from BYU and a master’s degree in art from Columbia University in New York City. “It was quite unusual for a woman to earn a master’s then,” she explains, “but it was important to me.”

At 103 years old, Alder is one of a handful of BYU alums who have reached the century mark, and she shows few signs of stopping. She is healthy and maintains her home in Provo. “Living a long life is in my genes,” she says. “My family has a history of longevity.”

Alder’s memories of BYU are warm thanks, in part, to brothers who were ahead of her in school. They’d find out who the best teachers were and make recommendations for her.

“I had such a feeling of happiness and satisfaction,” she says. “I made wonderful friends who have been friends all my life, and I developed a love for art and literature from inspiring teachers.”

She discovered she loved teaching when she taught school two afternoons a week to support herself while at Columbia. “You like to see minds expand and what they do after they grasp knowledge,” she says. “And how they use that knowledge is very important.”

Although she earned her degree in art, Alder considers herself primarily a teacher. She taught art for elementary teachers at BYU for more than 30 years. She also taught in Mexico City, where she met Diego Rivera, widely considered to be the greatest Mexican painter of the 20th century. “He became my friend, and I cooked him a couple of meals.”

Alder says she has had an excellent life with few regrets. “I get up early, go to bed early, mind my own business, and love my friends,” she says.