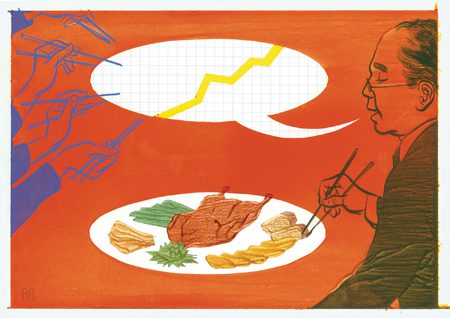 “Just to have a face-to-face audience with someone of that caliber was fascinating.”

When visiting Beijing, one must try the Peking duck. Or so a group of 18 BYU business students and their advisors were told during their three-week study abroad experience in Asia this spring. The most interesting part of their meal, however, was not the exotic cuisine. Thanks to several alumni connections, the students were unexpectedly joined by Chen Quan Sheng, director general of the research office of State Council of the People’s Republic of China.

As a top Chinese economic official, Mr. Chen made a fascinating dinner guest for a passel of business-minded undergraduates. After the students introduced themselves and BYU, Mr. Chen opened the conversation to any questions about China and its economy. “My jaw kind of dropped,” says Rachel L. Zackrison (’08), an accounting major who made the trip. “I’m thinking, ‘Seriously? We can ask you anything we want?’”

For nearly an hour, Mr. Chen fielded questions on land ownership, market control, foreign investment, and China’s current economic triumphs and challenges. “He was very frank and forthcoming about both the positive and the negative things that China is facing,” says Joseph D. Ogden (BA ’95), assistant dean of external relations for the Marriott School and an advisor for the trip. “Just to have a face-to-face audience with someone of that caliber was fascinating.”

“Just to have a face-to-face audience with someone of that caliber was fascinating.”–Joseph Ogden

The advisors and students agreed that perhaps the most valuable lesson from the conversation was the recognition of how much the people of China and the United States have in common. “This is the kind of experience that you can’t get out of a textbook or even out of a class somewhere in the United States,” says Ogden.

And how was the Peking duck? “I hear it was good,” says Zackrison. “I didn’t eat anything, because I was just so fascinated by everything he said that I was trying to write it all down.”

Gleeful in a Grim Business

A Series of Unfortunate Events has given a fortunate boost to the career of one BYU alum.

Civil engineer Mike Lowry takes his chances to improve the lives of individuals and communities.

Yep. And BYU research shows that they are not alone.