BYU research shows that Utahns are not alone.

John Denver sang, “rocky mou’un high”; Diana Ross and the Temptations sang, “ain’t no mou’un high enough.” All across the country, Americans drop t’s to the back of their throats (called a glottal stop)—but Utahns, with their “Wasatch Mou’uns,” seem to get the most grief for it. 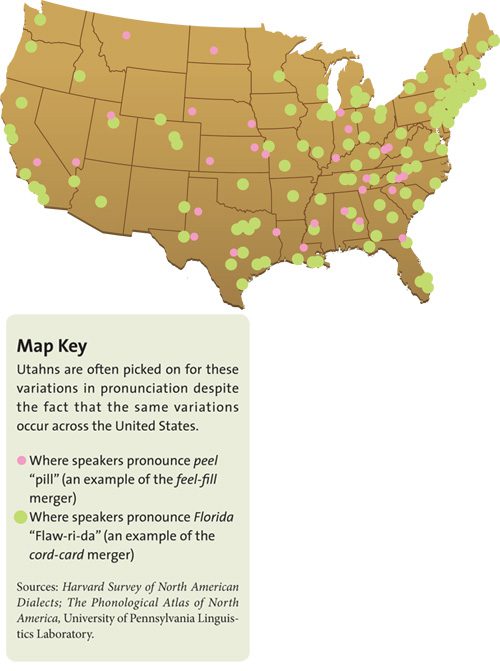 sound.” Utahns release the vowel after the t through their mouths instead of their noses. But they’re not alone. Linguists have noted the same oral vowel release in California, New Jersey, and elsewhere.

Why, then, does Utah get so much attention for it? BYU linguistics assistant professor Wendy Baker Smemoe (BA ’91) says many Americans may look down on Utah English because they perceive Utah as backward and rural. “Utah seems really rural compared to places like Southern California,” she says, and “Americans always rank rural [language] varieties lower than urban varieties.”

Common Utah vowel mergers like fail–fell (“Did you fell your test?”), cord–card (“Flarida Arange Bowl”), and feel–fill (“It’s the rill dill.”) also show up in the Northeast and South. “New Yorkers right now say ‘harrible,’ which is a cord-card merger,” says Smemoe. “But because we have positive feelings about the Northeast, we don’t think it’s weird.” Eddington adds, “I’ve tried to look for a characteristic that’s just in Utah, and I haven’t found one yet.”

Just where did the so-called “Utah-isms” originate? Some, like pro-predicate do (“You ski much?” “I used to do.”), came from English immigrants. Former BYU professor David F. Bowie was one of the first to research the Utah dialect in great depth and says Utah’s mix of northeastern vocabulary and southern accent are also remnants of the LDS migration. “The way you speak reflects a connection with where you’re from and how you grew up,” says Bowie. “People should be unafraid to talk however they want to.”

Warsh for Wash: typical of rural American English; found in Utah but not prevalent.

Skull for School: typical of younger Utah speakers, but originated in Southern California. Thank you, surfers.

Hembook for Hymnbook: similar to the pin-pen merger in southern American English.

If These Walls Could Speak

What are the most powerful passages of all time? Humanities professors pick their favorites for permanent display.

Disney, Netflix, and Chief Justice John Roberts are paying attention to the work of one word-mining professor.