Rosanne Tueller (BA ’67) had no idea her life was going to change dramatically when she stepped onstage to sing in 1964’s Fieldhouse Frolics, the Homecoming forerunner to BYU Spectacular.

Also appearing onstage was Norman L. Nielsen (BS ’63), who was dating Tueller, famous on campus as the runner-up to Miss America. In the center of the Smith Fieldhouse in the middle of the stage during the mid-point of a production number, he proposed—and she said yes.

“Boy, was I happy,” Nielsen says. “And I figured since she had agreed to marry me in front of thousands of people, she would have to go through with it. Not surprising, I always have great memories of BYU at Homecoming.”

While today’s Homecoming festivities have grown out of the traditions and celebrations of a half-century ago, some things, of course, have changed. 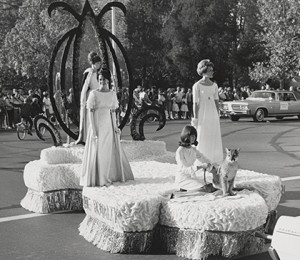 A live cougar joins the 1965 Homecoming royalty in the parade. Students in the ’60s spent days decorating floats and dorms.

Nielsen was a key contributor to Homecoming Fieldhouse Frolics during the early-to-mid ’60s. Besides performing, he served as an assistant to BYU legend Janie Thompson (BA ’43), the founder of the Program Bureau, who passed away in June 2013. “Janie had wonderful vision, and I was the ‘pick and axe’ man who helped bring her ideas to stage. When acoustic guitars were popular, for example, she had so many students who wanted to play them, she designed a number where they could fill the stage by playing elbow-to-elbow. Her casts were huge. I don’t think she ever turned away anyone who wanted to be on stage.”

Today’s BYU Spectacular, a two-night extravaganza that highlights the best in BYU’s audition groups, is reminiscent of the 1960s Frolics, a student talent show. But in the ’60s, Frolics took place only one night, with a concert the next. Early ’60s concerts included jazz pianist George Shearing, the Dave Brubeck quartet, comedian Bob Newhart, and the Four Preps. This last group, which gained fame with the song “26 Miles,” was scheduled to ride in the 1962 Homecoming parade. When the car to drive them failed to show, they rounded up four bicycles and waved to the crowds as they pedaled the route.

Students organized most of the activities, says C. LaVar Rockwood (MOB’76), the student coordinator who approved student activities for Homecoming 1962. According to Daniel R. Lau (BS ’64, MS ’67), the chairman that year, it was not unusual for students to put off studies long enough to work on Homecoming, which meant anything from stuffing tissue into chicken wire for one of the dozens of floats that paraded around Provo to decorating dorms based on that year’s Homecoming theme or preparing refreshments for a social unit open house. 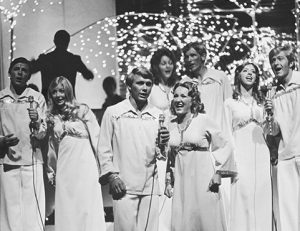 In the ’60s and ’70s, Frolics was a Homecoming talent show, the forerunner to today’s BYU Spectacular.

The Alumni Association contributed to Homecoming every year by designing and building a float for the Homecoming queen and her two attendants. Marilyn Johnson Brinton (BS ’63) wore the crown in 1962. Sponsored by the Sportsman Club, she recalls that clubs and organizations made nominations, and judges narrowed them to 10 finalists. During the competition, each contestant talked for five minutes about her most inspirational experience since entering college. She also answered questions. “I was asked what I believed were the attributes of an ideal woman and how it was possible to obtain these,” she adds. “Most girls listed spirituality as the first attribute. And others were a good wife, inner beauty, and love of oneself, fellow men, and God.”

The last student to wear the Homecoming crown was Wherry-Sue Crickett Goodsell Willardsen (BA ’88, MA’91) in 1987, when the pageant was retired. Also retired is the Homecoming song, an original piece performed by a crooner at assemblies, dances, and other Homecoming activities. One of the final soloists was Ronald J. Clark (BA ’72) in 1968.

“It was a great way to feel the spirit of the Y,” he says. “Some elements, especially football, are long-held traditions. But you know, regardless of how we celebrate Homecoming, we are all joined in the joy of being part of BYU.”

In Step with the Homecoming Parade

For more than a century, BYU’s parade has shared the Spirit of the Y with students, alumni,  and the community.

The Banner Days of Homecoming

BYU gets decked out for the Salt Lake Olympic Games.