Readers share their memories of life in on-campus housing.

As residents of Wymount Terrace, we received notice one day that our bikes had to be temporarily removed from the residential racks. Abandoned bikes would have their locks cut and would be impounded by the University Police, and there would be a fine to retrieve them.

My Olympia 12-speed, which I hadn’t ridden in years, was on the racks, and the weather was taking its toll: the foam grips had crumbled, the seat was split, the chain was rusted, and both tires were flat. My husband, Jim, couldn’t understand my insistence on keeping it, but he sweetly got the combination and retrieved it for me. “A thief has paid you the ultimate insult,” he declared as he stashed it behind the couch. “They took your lock and left the bike!”

It was a week before I took time to return the bike to the rack. As I leaned over the couch, I was horrified. This was not my bike! Mortified, I dragged the misrescued bike back to the rack. Mine, of course, was gone.

Sheepishly, I went to the University Police and told the whole story, mentioning that if anyone had reported a stolen blue Schwinn 10-speed, it justmight be back in the rack. The officer laughed and called more people to hear about my well-intentioned husband. By the time we went to the shed to retrieve my impounded bike, I’d told the story at least three times.

A while later, we casually mentioned the bike clean-up to some friends, intending to lead into our funny story. Their eyes widened, and they told us of their horrible old blue Schwinn, deliberately abandoned, which somehow eerily returned a few days later.

Roses Without Any Name 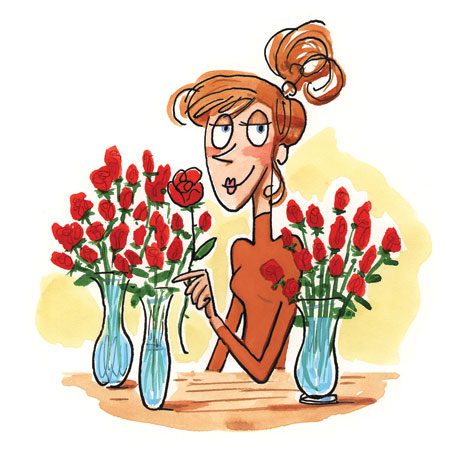 His immediate no, followed by a jealousy-tingled “Someone sent you roses?” assured me it wasn’t him.

Midway through the first semester of my freshman year, I returned to my room in Helaman Halls to find a dozen roses sitting on my desk. The unsigned note read, “I admire you deeply.” My curiosity piqued, I questioned my roommate and others on my floor. No one knew who had sent me the mysterious flowers.

I started going through possible sources. All of my old high school “guy friends” had gone on missions, so I turned to the few guys from Helaman Halls I had hung out with. I did not consider any of them as possibilities for such an affectionate gesture. Baffled, I had to get to the bottom of it. A littleembarrassed, I asked Steve, who was not a member of the Church. We had spent many evenings discussing what he was learning in his required Book of Mormon course. His immediate no, followed by a jealousy-tinged “Someone sent you roses?” assured me it wasn’t him.

I decided there was another possibility. One of my friends in the dorms was interested in Dennis. She was not brave enough to approach him, so I hadapproached him for her. Unfortunately, he showed interest in me, not my friend. Dennis and I had gone on a couple of innocent dates but nothing that would have led to the roses. He gave me the same emphatic no with the touch of jealousy.

Unwilling to go through that again, I gave up the search and decided the admirer would have to remain a mystery. Much to my surprise, when Ireturned to my room after class the next day, two dozen more roses were waiting on my desk. These had signed notes—one from Steve and one from Dennis. Only in the dorms, I realize now, only in the dorms.

In 1947, when I was a freshman, I lived with three roommates in Knight Hall. Our room was connected to and shared a bathroom with another room, which had only three occupants at first. About two weeks into the first quarter, our dorm mother introduced us to Bonnie, the fourth occupant of the connecting room. She was from a small town in Utah and was blind. She “looked” around the room with her hands and commented that we had changed the furniture. Unbeknownst to us, she had been shown her possible quarters while we were away, and we had indeed rearranged things a bit since then. We all felt that this “poor girl” would be our “burden to bear” and resolved to be as helpful and kind as possible.

We had developed a schedule for cleaning the bathroom, each of us taking a turn every seven weeks. One Saturday evening after we had all been gone most of the day, we came home to a sparkling bathroom. When one of us wondered out loud who had done it, Bonnie spoke up, “I did! I knew my turn would come, so I thought I might as well do it today.” Needless to say, we no longer worried about having a burden. Bonnie lifted ours in many ways. 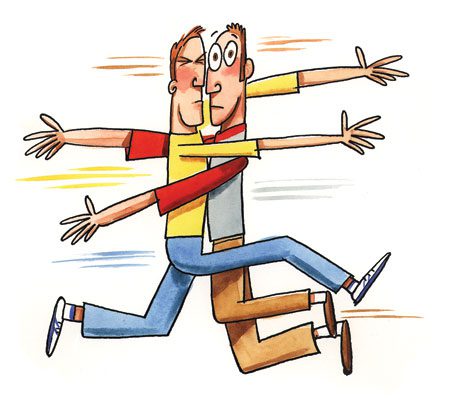 One of the best parts of being a freshman was sending off our various friends on missions. Each week we’d hug another future elder goodbye and then plan out wacky care packages to send to the MTC. A few months into the semester, one of the girls on our Deseret Towers floor sent off her boyfriend. In what we determined was pure cheesiness, she made a picture showing the dorms, the MTC, and the bridge of their undying love connecting the two. This was all the fuel my roommate and I needed to launch the “I Miss My Missionary” campaign.

When our own boyfriends left just weeks later, the war was on. Each day we’d add something mischievous to the other person’s side of the room. Both of our elders were serving in Germany, so of course a flag had to be hung in our window. Next to follow were chains counting down the days until they came home, mock wedding invitations, and sappy phrases. The clincher for me came when I got home from class one day and noticed something strange on my wall. Closer inspection showed that my roommate had made about 30 copies of my missionary’s face and carefully pasted them over the faces of the males in every photo I had hung up.

Of course, she ended up with the last laugh. She married her boyfriend within a year of his return. As for me, I became talented at the art of writing Dear John letters.

A Lesson in Physics

At the end of the year, after finals, our floor in Deseret Towers challenged another floor in our hall to a few outdoor competitions, one of which was a tug-of-war across an irrigation canal near Heritage Halls. Because the heights of the two banks of the canal weren’t quite the same, we decided to switch sides after the first event and repeat the tug-of-war. Many of us, not wanting to walk the 30 or so yards to one side to cross the canal at a bridge, simply ran and jumped over it. Since the canal had sloping banks, I kept a careful eye on the ground as I ran up to the canal and leapt. I looked up just in time to see that someone from the opposing team had done exactly the same thing at exactly the same time in exactly the same (but opposite) place along the canal.

One floormate told me—once he could stop laughing—that it was like watching a live-action cartoon. We hit each other full on right over the middle of the canal, exactly canceled out each other’s momentum, hung for a split-second in mid-air, and then dropped into the canal’s cold water together. For my part, I put out my right hand to break my fall and slammed it onto one of the large, round rocks at the bottom. I was unable to shake hands for a month.