In Step with the Homecoming Parade

For more than a century, BYU’s parade has shared the Spirit of the Y with students, alumni, and the community.

Thousands of spectators and hundreds of performers will participate in one of BYU’s longest-running traditions when the annual Homecoming parade begins Oct. 24 at 10 a.m.

Founder’s Day and its accompanying parade became an annual tradition that was absorbed into BYU’s first Homecoming in 1930 and remains a part of Homecoming today. Each year BYU honors one of the school’s past leaders. Eugene L. Roberts (AB 1916), the school’s first athletic director and a legendary hiker, is this year’s honoree. 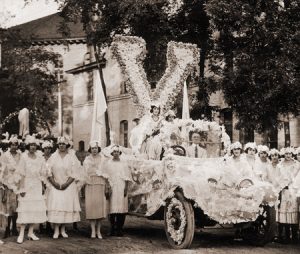 Abundant flowers adorn an entry for the 1914 Founder’s Day parade. Absorbed into Homecoming in 1930, Founder’s Day celebrations began in 1891.

“Homecoming is all about coming back to your roots and reestablishing a connection with BYU,” says John C. Lewis (BA ’77), BYU associate advancement vice president and head of the Homecoming committee. “Celebrating the life of someone that made BYU possible is a really wonderful piece of that emotion.”

Over the decades, the parade has featured many different attempts to foster those emotions, from a 1914 flower-covered float to the simple Depression-era parade that lacked floats and instead featured a long line of students waving and smiling.

“A Homecoming parade should be an event that involves students, alumni, and the community,” says Ronald L. Jones (BS ’71), parade organizer since 1999. “My goal is to bring those three together in a combination that’s fun for everybody.” Jones has enhanced the long-standing tradition of serving breakfast at the parade by adding locations and having parade announcers at each breakfast location.

For many years, a highlight for parade-goers was the chance to see the Homecoming queen. BYU’s last pageant took place in 1987.

“I was just really honored to be next to these dignified women that strived to be well-rounded,” says Cheryln Olson Hart (BS ’69), who was elected queen in 1968. “I will always remember the strength I came away with from being a part of that.”

For the parade, Hart rode in a convertible with two members of the Sportsmen club—one of them her future husband. “The event was full of a lot of energy,” she says.

The same year Hart rode in the parade, an unusual float graced the streets of Provo: the largest cake in the world. At about 5 feet tall, 6 feet wide, and 40 feet long, the cake was built from 6,000 9-inch by 13-inch yellow cakes baked by students and put together on a flatbed truck. After the cake’s parade debut, spectators ate it at the football game.

In the history of the parade, the BYU folk dancers stand out with a long streak of winning floats. After their first float, in 1973, made with chicken wire and colored napkins, the group’s assistant director, Dennis W. Hill (BS ’84), took a class on float building. For the next decade, the folk dancers used a special float-building shop in Salt Lake City to create winning floats.

“It became a unifying force for the folk dancers,” Hill says. “Students on the touring group would be working next to a freshman who just joined the team and everybody felt as if they owned part of the float.”

Folk Dance Ensemble founder Mary Bee Jensen (MRE ’63) was the grand marshal for the Homecoming parade three years ago as the group celebrated its 50-year anniversary. “The grand marshal ends up in a very key, visible role for the university,” Lewis says. This year’s grand marshals will be 2009 track and field national champions Lacey M. Cramer (’12), Amy Menlove Otis (’10), and Kyle T. Perry (’09).

Truth and Salvation: A Spiritual Experiment