Truth and Salvation: A Spiritual Experiment

By Matthew H. Kennington in the Spring 1996 Issue

The entire chemistry lab smelled like pears. We had three hours to make isopentyl acetate, a seven-carbon ester that smelled—according to Dr. Steven Wood—like either pears or bananas, take your pick. I was watching my solution boil merrily on the heating block, and I didn’t notice Dr. Wood approaching from behind. “There it is,” he said, looking over my shoulder. “Proof the reaction is working.” Where he pointed I noticed a collar of tiny bubbles in the vial.

“Water?” I guessed: H2O is a by-product of so many reactions.

“Look closer at the drops,” he said. I did and noticed some were different. The larger drops stayed stuck to the glass; only the smaller ones slipped back down into the boiling solution. “The big ones are water,” he hinted.

Suddenly, I understood what was right in front of me. The smaller drops were the target product, the isopentyl acetate. I said something appropriate for a person experiencing a personal revelation, something like, “Hey! Neat!”

This isn’t an essay about isopentyl acetate; it’s about Brigham Young University, a place where a unique experiment in higher education is being carried out. It’s about measuring, somehow, whether or not the experiment is working. But before we can decide that, we need to remind ourselves what BYU is trying to do.

In conjunction with its reaccreditation, BYU has been conducting several campus-wide surveys. In the 1995 Annual University Conference, Provost Bruce Hafen reported the findings of the “University Values Survey.” He said:

The data show an incredibly high level of agreement among all of the university’s constituents that BYU’s most important purpose, and its most distinctive characteristic, is to nurture an educational environment based on the integration of both spiritual and academic values.

It’s encouraging to hear there is a general consensus on such a worthy goal, but how can we work with it? How is our “most important purpose” to be included in our university appraisal—”Our entering freshmen average 27.2 on the ACT and 95.3 on their PPI”? More importantly, how do we even begin to measure where we are in relation to such an incalculable aim, and how we need to improve?

The dilemma may not be so different from the midterm exams Dr. Wood gave us. In lab, he handed out test tubes full of various substances for us to identify: clear liquids, yellow powders, white crystals. My first unknown was a pale yellow liquid that smelled like a flower arrangement. 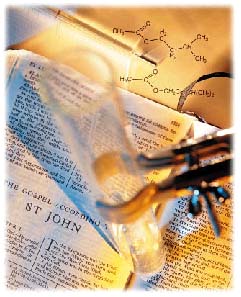 What quickly became apparent was that no single piece of evidence was going to solve my puzzle. The proton-NMR and infra-red spectra narrowed the possibilities to five or six substances, and when I measured the boiling point, I thought I had it. But I wasn’t sure. Dr. Wood sent me back for more evidence. I tested the solubility. I noted how my unknown reacted with other chemicals, and I measured how it bent light. In the literature I looked up the chemical I thought I had. Next to the listed boiling point, it read, “floral odor.”

The point, of course, is that you can’t measure directly what something is; you can only measure what it does, and the more different ways you observe what it does, the surer your identification. With enough consilient data, you can accept the premise as a starting point and proceed (or, in my case, turn in the lab report), even though nothing is proven.

“BYU’s most important specific goals,” as Provost Hafen put it, “are to develop students who behave ethically, who serve God and their fellow beings, and who have strong testimonies of the restored gospel” (34). This means that success, for BYU, is something indistinguishable; we’ll never be able to measure it directly. But it also distinguishes BYU among universities. To abandon such a lofty aim for the sake of scientific objectivity would be foolishness. Such a concession would mean the end of a grand experiment.

Not long into the semester, I went to Dr. Wood for help interpreting a proton-NMR spectrum. I found him sitting near the air vents outside the MARB, helping another student with the same question. We talked about what the graph revealed, how to interpret the many bumps and ridges, and which ones were significant. Somehow we moved from there into more general topics: What is truth, and how can it be perceived? It was the first time I had cross referenced my lab manual with the Doctrine and Covenants.

I do not juxtapose the scriptures with my chemistry text in jest. I believe that one way of stating the hypothesis being tested at BYU is this—there are not many truths, but one only, and that is Christ Jesus. Of course, I expect to raise some scientific eyebrows by calling this a theory—even a hypothesis—untestable as it is by accepted scientific methods. But there are tests that lie outside the present realm of science, tests that have been reproduced again and again, and yielded positive results. To ignore these testimonies would be—in light of our pursuit of truth—foolishness, not to mention poor science.

What use is a theory like this in an academic setting? For one thing, it ought to allow us to make some substantial predictions. For instance, we ought to expect that as people learn to discern truth, no matter what various angles they approach it by, they will begin to converge on the same point. Though they may move slowly from one pocket of relative “truth” to the next, the pockets themselves will converge. And what they will eventually come to, those who thirst for more and purer draughts of truth, when they have come to the end of their searching, will be Christ, and they will find refreshment in his living water.

We can further predict that humankind’s centuries-old quest for spiritual enlightenment will increasingly inform, and be informed by, the much younger empirical approach. I venture one more guess: that the most sophisticated equipment for discerning truth has not been invented—that, as the scripture says, it cannot be created or made (D&C93:29).

I do not expect that most scholars immediately recognize the significance of BYU’s mission statement. Why should they be expected to? They have committed to one method of investigation; we are experimenting with another. They may even think it lamentable that we would “sacrifice” some portion of our academic integrity or intensity to an overriding spiritual agenda; but if our theory about truth proves true, we will find that spiritual integrity is academic integrity—they are two ways to look at (and look for) the same thing.

The question remains, is BYU’s experiment working? Have we seen results, and have we recognized them for what they are? I have my own answer, based on a few of my experiences here: a history class from Dr. Hal Miller, a few writing courses, and a bioethics class led by an inspired TA. Brother Sommerfeldt’s testimony of the Book of Mormon. Also Dr. Julie Nichols, and a few other professors whose “personal example [has been my] best teacher” (Hafen 44). And a chemistry professor who used liquid nitrogen to make instant ice cream for our final. Small bits of evidence, I admit. Mere drops. But I suspect we will find there is a great deal more evidence out there, if we know what we’re looking for.

Matthew H. Kennington is a senior at BYU, majoring in English and various other subjects.