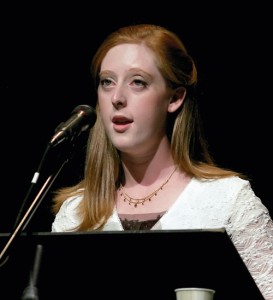 EDITOR’S NOTE: Five students were honored at Homecoming 2005 as winners in the annual Brimhall Essay Contest, which celebrated the educational legacy of Joseph Smith Jr. Heidi Harris (’06), a humanities major from Tokyo, wrote the first-place essay, printed here. She received a $1,000 prize and read her essay at the Homecoming Opening Ceremony.

I once bought a Latin textbook. That might not sound like anything remarkable, but for a cash-strapped student in the early weeks of winter semester, it was peculiar. Latin was nowhere on my graduation radar, and I was not, and had never been, enrolled in a Latin class. Until that moment, I had not even considered the possibility. But in the enthusiasm of the previous hour’s lecture, I had suddenly found myself caught up in an irresistible spirit, the spirit of education.

During that semester, I would walk between classes with a pack of homemade Latin flashcards, voraciously devouring every conjugation and gradually realizing with every flip of the deck how limited my lifetime was compared to the immense amount of knowledge I had yet to learn. I internalized the revelation given to Joseph Smith Jr. that “whatever principle of intelligence we attain unto in this life . . . will rise with us in the resurrection” (D&C 130:18), and I personally affirmed “the great necessity there is of our rightly improving our time and reigning up our minds,”1 as he described at the opening of the School of the Prophets in Kirtland.

But these insights I took to heart did not come from a formally educated man. Joseph Smith only completed one or two grades in a common country school. In his youth, his reading was limited to the Bible, one history book, and perhaps a battered old arithmetic book.2 Joseph Smith did not attend a world-class university. There were no PhDs adorning his walls—not even a high school diploma. So why do we honor this man as a founder of our university?

We honor him because paper diplomas and honorific robes crumble away, but the doctrines of education he taught and exemplified are the living foundation of Brigham Young University. BYU is an institution that amalgamates Joseph Smith’s encouragement to catch the spirit of lifelong learning and, more important, to catch the spirit of God within our conference rooms, offices, laboratories, and lecture halls.

George Q. Cannon once wrote of Joseph Smith, “No man of his time loved knowledge more than he.”3 Joseph instituted a system of common schools for children as well as the School of the Elders and the School of the Prophets to instruct the Saints in gospel topics as well as varied secular subjects; he studied German, Greek, Hebrew, and Latin, easily trumping my recent linguistic attempt.4 Educating himself was often his day’s primary focus. While learning Hebrew during the early months of 1836, for example, Joseph Smith wrote repeatedly in his journal, “Spent the day studying, as usual.”5 In 1841 Joseph Smith led the way to organize the University of the City of Nauvoo, which offered courses in calculus, chemistry, English literature, the art of sacred singing, and French, to name a few.6 The educational achievements of Joseph Smith embodied the spirit of lifelong education.

That fact alone would qualify Joseph as an honored founder, but he also chiseled a facet of BYU that has made it unique among universities. Writing in the Times and Seasons that “righteousness embraces knowledge,”7 Joseph made the connection between the spiritual and the educational that is the cornerstone of BYU’s foundation.

On my bookshelf sits a well-worn Latin textbook, and you can still see me walk across campus consulting a stack of pink and white flashcards. I am grateful for the example of Joseph Smith’s perseverance and strengthened by the spirit of education I have caught from Brigham Young University. But as I continue on to graduate school, I know I will find myself depending more on the strength I have received from the personal spirit I caught in a professor’s prayer, a classmate’s testimony, and my own tear-filled eyes during a lecture I once attended about our founder, the true prophet, Joseph Smith Jr.

Once a flood victim herself, BYU student Anelle Concepción now uses her studies to protect communities from floods.

This alumna shows off her work in the arts.